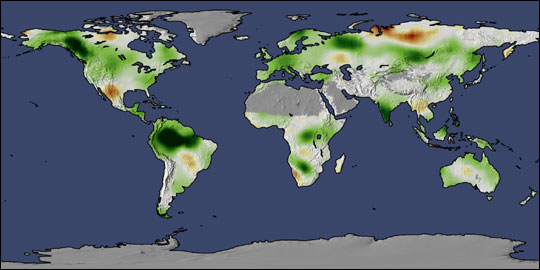 Between 1982 and 1999, the climate became warmer, wetter, and sunnier in many parts of the world. Nearly 20 years of satellite observations of Earth’s vegetation reveal that these changes increased the overall productivity of land plants by 6 percent. This map shows productivity increases during the time period in green, while decreases are shown in brown. Productivity, which is the net uptake of carbon, increased the most in tropical regions and northern latitudes. In the tropics, climate change resulted in fewer clouds and more sunlight, while in the North, temperatures increased. Productivity increased as climate change eased the normal constraints on plant growth in a given region.

Although 25 percent of the Earth’s vegetated surface experienced increased productivity, 7 percent experienced a decrease. The vegetation of northern Mexico and Siberia appears to have suffered from the climate changes of the last two decades of the twentieth century. While the increases in productivity are scientifically significant, giving scientists a better understanding about how carbon moves between the atmosphere and land, practically speaking, the impacts on global habitability of this small change are dwarfed by the more rapid increase in human population.

Image by Robert Simmon, based on data provided by the University of Montana Numerical Terradynamic Simulations Group