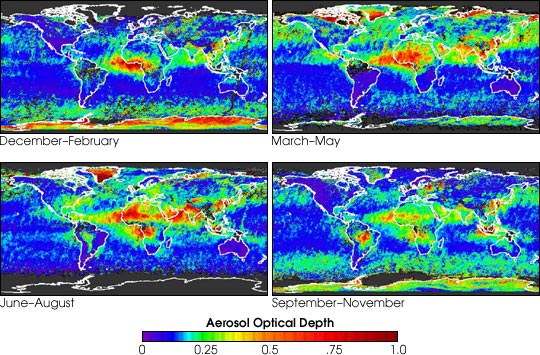 A color scale is used to represent optical depth; relatively clear sky is indicated by blue and purple pixels, whereas hazier atmosphere is indicated by red, orange, yellow or green pixels. Good continuity across the land-ocean boundary is observed between the eastern Atlantic Ocean and the Saharan desert source region. Deserts are the main sources of mineral dust, and MISR obtains aerosol optical depth at visible wavelengths over these bright areas. In the southern hemisphere, elevated aerosol amounts during the austral spring (September-October-November) are associated with the increased biomass burning that occurs in South America, Southern Africa and Australia during these months. Over northeastern Asia and Europe, aerosol amounts are higher during the boreal spring season (March-April-May). Other noteworthy features are the spatial separation of African aerosol sources into two distinct bands during the June-July-August season, a peak for Central American aerosol during the March-April-May fire season, and changes that occur over the Indian subcontinent and southeastern Asia over the course of the year.

One of the most challenging steps in obtaining good aerosol retrievals is the screening of clouds. The MISR algorithm uses several techniques, including radiometric (brightness) and stereoscopic cloud-detection masks. The high aerosol amounts over homogeneous ice sheets (Antarctica and Greenland) are probably an artifact of cloud screening limitations in these areas. Introduction of additional cloud masks and other product improvements are subjects of continuing work by the MISR team.

The Multi-angle Imaging SpectroRadiometer observes the daylit Earth continuously from pole to pole, and every 9 days views the entire globe between 82 degrees north and 82 degrees south latitude. The MISR Browse Image Viewer provides access to low-resolution true-color versions of these images.

For the results of last week’s MISR Where on Earth? quiz, visit http://www-misr.jpl.nasa.gov/education/whereonearth.html