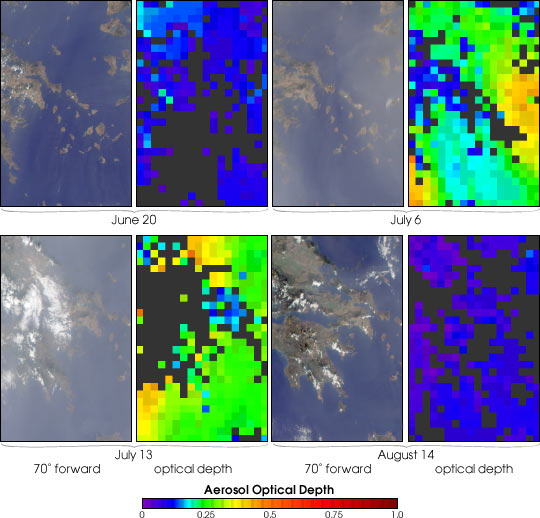 Strong synoptic (regional-scale) winds usually help to disperse pollutants over the skies of Greece and the Aegean Sea during winter months, and in late summer relatively strong northly winds typically prevent significant aerosol influx from the south. During the summer of 2002, the northly Etesian winds were exceptionally weak, allowing Sahara dust from the south to reach the Aegean region. This resulted in elevated aerosol levels, particularly in the month of July. The abundance of aerosol over Greece and the Aegean Sea on four dates during the summer of 2002 are illustrated by these images from the Multi-angle Imaging SpectroRadiometer (MISR).

In the natural-color images (the left-hand panel of each pair), it is apparent that aerosol particles are more abundant over the region on the two dates in July than in either June or August. These natural-color views were acquired by MISR’s 70-degree forward-viewing camera. The top and bottom views depict overlapping parts of mainland Greece and the Aegean, with the bottom panels covering a region to the west of the top panels. Data from each of the four dates have been processed identically, and relative brightness variations between the views are preserved.

MISR retrieves information on aerosol amount and particle properties by using the changes in scene brightness and contrast at nine widely-spaced view angles and four spectral bands. The right-hand panel of each image pair is a map of retrieved aerosol amount, parameterized by a quantity called aerosol optical depth. A color scale is used to represent this quantity. Higher amounts of aerosol within the total column of the atmosphere are indicated by green, yellow or orange pixels, and clearer skies are indicated by purple and blue pixels. Dark gray pixels indicate places where clouds or other factors precluded an aerosol retrieval.

The Multi-angle Imaging SpectroRadiometer observes the daylit Earth continuously from pole to pole, and every 9 days views the entire globe between 82 degrees north and 82 degrees south latitude. The MISR Browse Image Viewer provides access to low-resolution true-color versions of these images. This data product was generated from a portion of the imagery acquired during Terra orbits 13325, 13558, 13660 and 14126. The panels utilize data from blocks 59 to 62 within World Reference System-2 paths 182 and 183.