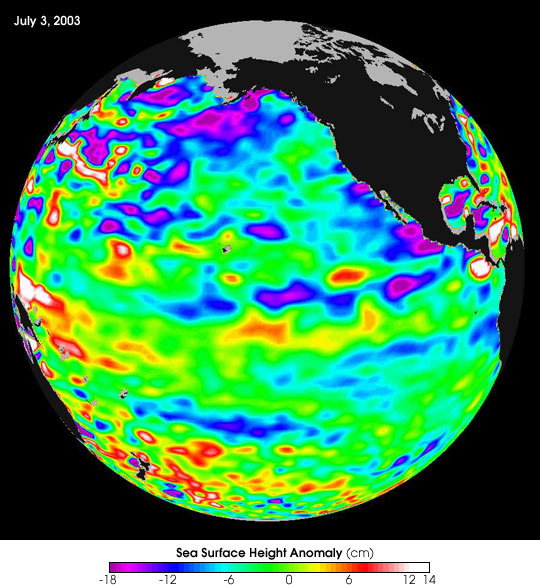 Since the weak El Niño event of last winter, the equatorial Pacific has cooled and oceanographers have been on a La Niña “watch.” Thus far, equatorial waters have seesawed between cooling and the present slight warming. Elsewhere, the northern and northeastern Pacific Ocean remains quite cool and sea levels are much lower than normal. These cooler ocean waters off the U.S. West Coast have driven a cooler and foggier spring and early summer along the coast, and guided the North Pacific Jet Stream north, keeping the West and Southwest in the grip of a 5-year drought.

Sea-surface heights are a measure of how much heat is stored in the ocean below to influence future planetary climate events. Jason scientists will continue to monitor the Pacific closely for further signs of La Niña formation and intensity, or not.

These Jason data were taken during a 10-day collection cycle ending July 3, 2003. The near-equatorial ocean has been very quiet, although sea levels and sea-surface temperatures are near normal or slightly warmer throughout the far western and central equatorial Pacific. Red areas are about 10 centimeters (4 inches) above normal; white areas show the sea-surface height is between 14 and 32 centimeters (6 to 13 inches) above normal. This slight rise in sea levels (warming) contrasts with the Bering Sea, Gulf of Alaska and U.S. West Coast, where lower-than-normal sea-surface levels (blue areas) and cool ocean temperatures continue. The blue areas are between 5 and 13 centimeters (2 and 5 inches) below normal, and the purple areas range from 14 to 18 centimeters (6 to 7 inches) below normal. 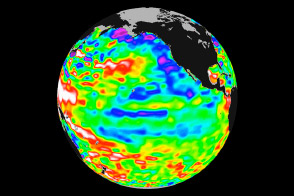