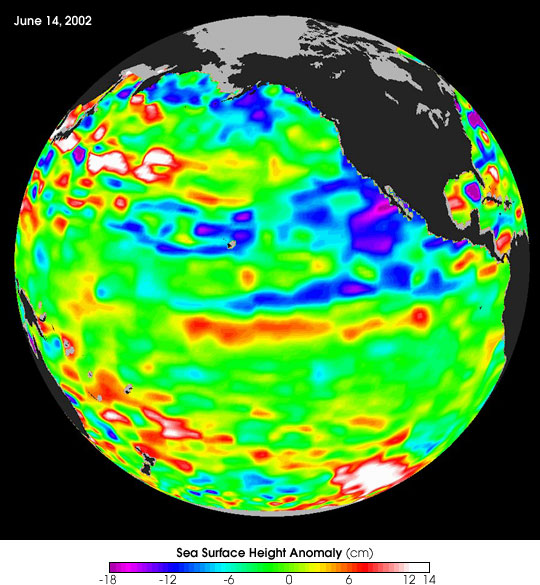 The Pacific Ocean doesn't show signs of anything that looks like the whopper El Niño of 1997-1998, according to the latest information from the U.S.-French ocean-observing satellite Topex/Poseidon. The data do show that the mid-equatorial Pacific Ocean has slowly warmed by about 1 degree Celsius (1.8 degrees Fahrenheit) above normal in the past few months. However, the Pacific continues to be dominated by the larger-than-El Niño/La Niña pattern called the Pacific Decadal Oscillation, which may discourage El Niño development.

The ocean warming in the past month can be explained by a relaxation in the equatorial trade winds observed by NASA's Quick Scatterometer (QuikScat) satellite, which measures ocean wind speed and direction. These winds usually blow from the Americas towards Asia, helping push warm water eastward. "For the first two weeks of June, these winds were unusually weak," said Dr. Timothy Liu, QuikScat project scientist. "But by last week, they had returned to normal. If the weakening continued or intensified, we could have been expecting an El Niño to develop by early fall." (See http://airsea-www.jpl.nasa.gov/ENSO.)

For the past few winters the weather- and moisture-delivering jet stream has been steered north by the Pacific Decadal Oscillation and other planetary patterns, resulting in a warm winter all across the United States and very dry conditions on the East and West coasts. A large enough El Niño might provide some relief for the drought-plagued west, southwest and southeast U.S., but it's wishful thinking so far," Patzert added.

The Topex/Poseidon data were taken during a 10-day collection cycle ending June 14, 2002. They show that there hasn't been any fundamental change in the ocean's large-scale patterns for the past three years. The near-equatorial ocean has been very quiet, although sea levels and sea-surface temperatures are near normal or slightly warmer throughout the far western and central tropical Pacific. Red areas are about 10 centimeters (4 inches) above normal; white areas show the sea-surface height is between 14 and 32 centimeters (6 to 13 inches) above normal. This warmth contrasts with the Bering Sea, Gulf of Alaska and U.S. West Coast, where lower-than-normal sea-surface levels (blue areas) and cool ocean temperatures continue. The blue areas are between 5 and 13 centimeters (2 and 5 inches) below normal, and the purple areas range from 14 to 18 centimeters (6 to 7 inches) below normal.

For more information, read: As Summer Starts, Next El Niño Is Slow to Grow.