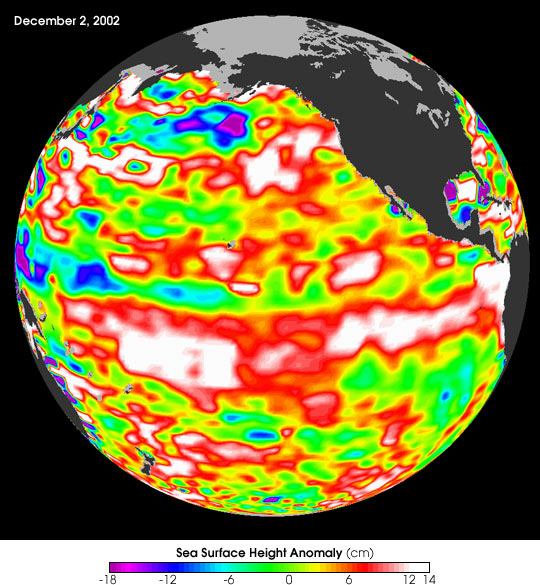 The latest image from NASA’s Jason oceanography satellite, taken during a 10-day collection cycle ending December 2, 2002, shows the Pacific dominated by two significant areas of higher-than-normal sea level (warmer ocean temperatures). In the central equatorial Pacific, the large area of higher than normal sea surface heights (warmer than normal sea surface temperatures) associated with growing El Niño conditions has recently migrated eastward toward the coast of South America. Meanwhile, the influence of the 20- to 30-year larger than El Niño/La Niña pattern called the Pacific Decadal Oscillation continues to create warm, higher-than-normal sea-surface heights in the north Pacific that are connected in a warm horseshoe pattern with the western and southern Pacific. Sea-surface heights are a measure of how much heat is stored in the ocean below. This heat influences both present weather and future planetary climate events.

For more information about the current El Niño, read:
NOAA Says El Niño to Influence U.S. Weather and
The Return of El Niño