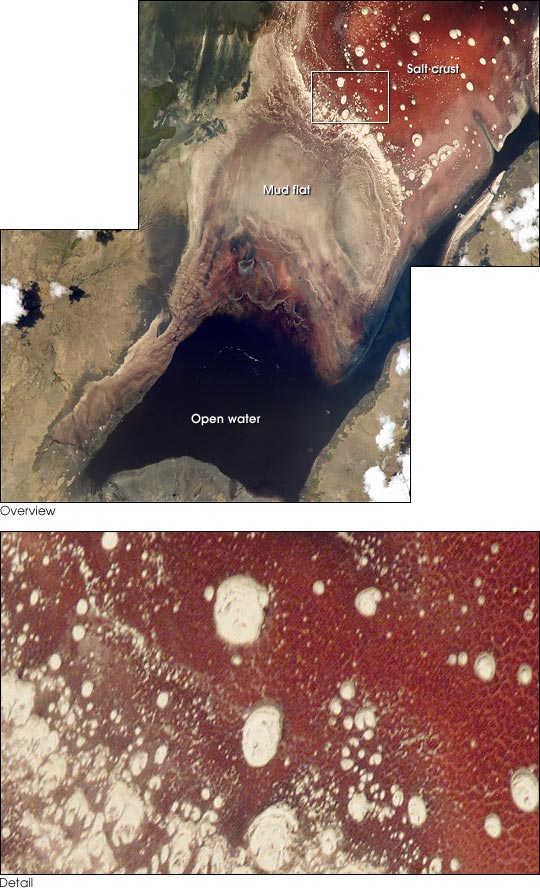 If Lake Natron, in Africa’s Great Rift Valley had a color theme, it would be pink. The alkali salt crust on the surface of the lake is often colored red or pink by the salt-loving microorganisms that live there. And the lake is the only breeding area for the 2.5 million Lesser Flamingoes that live in the valley. These flamingoes flock along saline lakes in the region, where they feed on Spirulina (a blue-green algae with red pigments). Lake Natron is the only breeding location for Lesser Flamingoes because its caustic environment is a barrier against predators trying to reach their nests. The temperatures in the mud can reach 50 degrees Celsius (122 degrees Farenheit), and depending on recent rainfall, the alkalinity can reach a pH of 9 to 10.5 (almost as alkaline as straight ammonia). Even more amazing than the ability of the flamingoes to live in these conditions, is the fact that an endemic species of fish, the alkaline tilapia thrives in the waters at the edges of the hotspring inlets. Because of the unique biodiversity, Tanzania named the Lake Natron Basin to the Ramsar List of Wetlands of International Importance on 4 July 2001.

This mosaic of photographs of the southern portion of Lake Natron shows the largest open lagoon area, and island mud flat, and a large area of pink salt crust. The images were taken by astronauts from the International Space Station on 11 November 2002, using a digital camera, 400 mm lens, and 2 x extender, in order to capture the details of the salt crust structures. The colors show the actual colors viewed by the astronauts. Each time the lake is photographed, there are differences in the pattern of its salt crust, and the red colors of the blue-green algae and bacteria on the surface of the crust.

Previous examples of the appearance of Lake Natron salt crusts as photographed from the Space Shuttle:
February 1984
March 1989
July 1999

ISS005-E-2054, ISS005-E-2055, and the mosaic were provided by the Earth Sciences and Image Analysis Laboratory at Johnson Space Center. Additional images taken by astronauts and cosmonauts can be viewed at the NASA-JSC Gateway to Astronaut Photography of Earth.