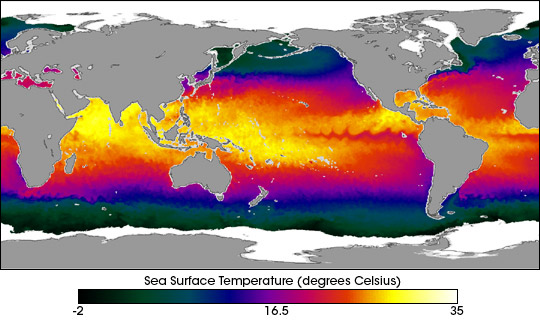 On May 4, 2002, NASA launched the Aqua satellite—the second of its Earth Observing System flagships. Since the mission’s science operations began, Aqua’s sensors have been returning spectacular views of our home planet. The image above shows global sea surface temperature as measured on June 1, 2003, by NASDA's Advanced Microwave Scanning Radiometer for EOS (AMSR-E) aboard the satellite.

The colors in this false-color map represent temperatures of the ocean’s surface waters, ranging from a low of -2°C (28°F) in the darkest green areas to a high of 35°C (95°F) in the brightest yellow-white regions. Sea ice is shown as white and land is dark gray. Note the continuous coverage that AMSR-E provides around the world—because it makes its measurements through clouds, there are no gaps in the data.

When viewed in sequence, the entire first year of AMSR-E daily global images (from June 1, 2002 through May 31, 2003) makes a fascinating movie (3.2 MB QuickTime). For instance, notice the intense upwelling of relatively cold water in the eastern Pacific, along the equator. Strong easterly trade winds push these cold surface waters toward the west, resulting in a characteristic wave pattern scientists call “ tropical instability waves.”