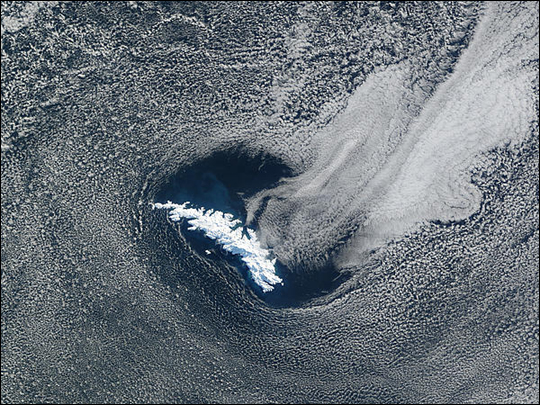 Located in the Southern Atlantic Ocean roughly 1,700 miles (2,735 km) due east of Argentina’s southernmost tip, South Georgia Island was a stop-over point for Sir Ernest Shackleton in November 1914. Sailing aboard the Endurance, Shackleton was on his famous expedition to be the first to travel across Antarctica, from sea to sea and across the South Pole. At that time, the island was home to only a small whaling village on its northern shore. In April 1915, with his mission failed and most of his crew stranded on Elephant Island some 800 miles (1,287 km) to the southwest, Shackleton returned to South Georgia Island in a lifeboat with some of his men— rowing through blizzard-like conditions and later riding out a hurricane just off South Georgia Island’s southern shore. Shackleton eventually made landfall and quickly set out again on a rescue expedition to Elephant Island where he successfully recovered the rest of his crew. Today, Shackleton lies buried in a small cemetary at Grytviken.

South Georgia Island is entirely covered by snow and ice in this striking true-color image acquired by the Moderate Resolution Imaging Spectroradiometer (MODIS), flying aboard NASA’s Terra satellite, on August 8, 2002. Some 105 miles (170 km) long and varying from 1 to 25 miles (2 to 40 km) wide, the island itself resembles a carved and weatherbeaten whalebone. The many dark shadows contrasting with the bright white surface reveal a rugged terrain, with eleven mountain peaks across the island standing taller than 2,000 meters (6,560 feet). Mount Paget’s peak, located near the center of the island, is the tallest, standing roughly 2,900 meters (9515 feet).

Many boundary layer cumulus clouds fill the atmosphere in the larger region surrounding the island in this scene. Toward the upper lefthand corner of the image a number of sinewy patterns snaking across the cloud bank indicates open-cell convection. South Georgia Island appears to be creating a wake of thicker marine stratocumulus clouds flowing away from its northeast shore. Interestingly, one tongue of the marine stratocumulus appears to point directly at a pass running through the mountains, through which strong winds are undoubtedly channeled. The break in the clouds surrounding the island nicely frames a unique view of the surface. Phytoplankton appears to be in bloom all around the island, giving the deep blue South Atlantic waters a lighter, more turquoise hue.