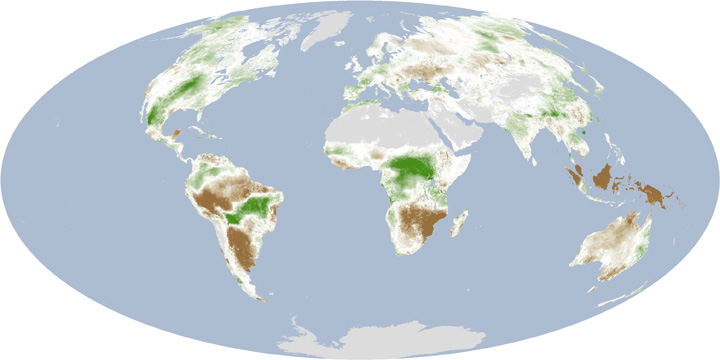 Conventional wisdom holds that plants should thrive when temperatures warm and the growing season lengthens under a changing climate. A 2003 study showed that plant growth indeed increased as temperatures warmed between 1982 and 1999. But when researchers at the University of Montana updated the study for the last decade, 2000–2009, they discovered that even though the decade was the warmest since instrumental record keeping began, plant growth slowed. The study is significant because plants soak up carbon from the atmosphere as they grow. As growth slows, the amount of carbon plants take up slows as well, leaving more carbon in the atmosphere to contribute to climate change. It is also a warning that a warming climate could bring a decrease in food and biofuel production.

Researchers Maosheng Zhao and Steven Running published the work in Science on August 20, 2010. They used data from the Moderate Resolution Imaging Spectroradiometer (MODIS) on NASA’s Terra satellite to monitor plant growth and calculate the total amount of carbon plants store as they grow, a value called net primary productivity. Their results are illustrated in this image, which shows the change in the amount of carbon consumed by plants between 2000 and 2009. Green areas show where plants grew more (and consumed more carbon), and brown areas show where they grew less. The deeper the color, the stronger the trend.

It is too early to tell if the recent decade marks the beginning of a longer term trend in plant growth related to long-term climate change. Climate is defined by patterns seen over longer periods of time, at least 20-30 years. In the previous 20 years (1982–1999), plant growth and the related carbon uptake increased as much as six percent. Regardless, the observed decrease in plant growth between 2000 and 2009 helps researchers better understand how plants might respond to a changing climate.

“We see this as a bit of a surprise, and potentially significant on a policy level because previous interpretations suggested that global warming might actually help plant growth around the world,” Running said. “This is a pretty serious warning that warmer temperatures are not going to endlessly improve plant growth.”

A longer NASA feature article and videos describe the results in greater detail.