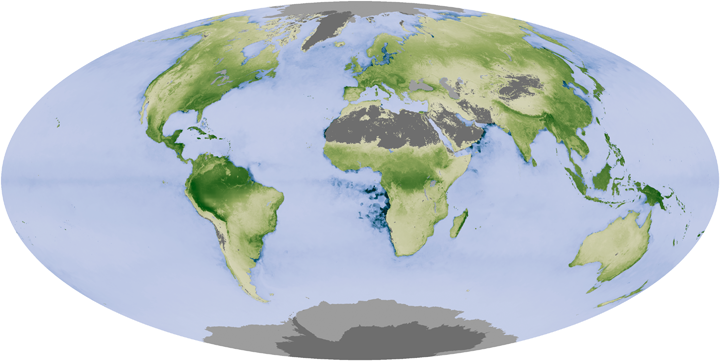 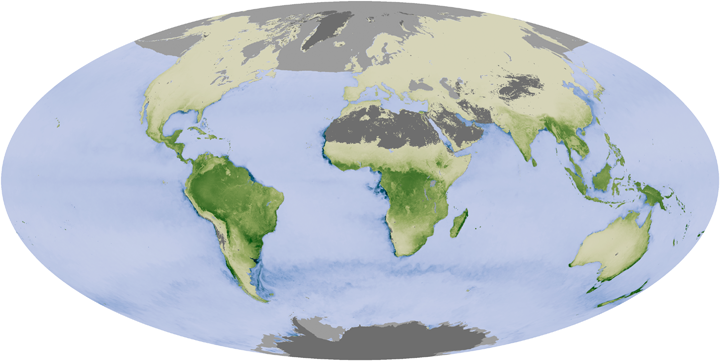 Plants breathe. They take carbon dioxide from the atmosphere and turn it into the sugars that become leaves, stems, roots, and woody trunks. What carbon dioxide they don’t use, they exhale, releasing the leftover gas with oxygen. And after plants die, they decay, releasing the carbon to the atmosphere. The difference between the amount of carbon plants absorb and what they release is called net primary productivity. It is a direct measurement of how much plant matter—from crops to forests or ocean phytoplankton—Earth produces.

The amount of carbon plants store varies from month to month with the seasons, as shown in these two images. During spring and summer, plants flourish in the warm temperatures and abundant light. Growth drops off in the winter, when cold and darkness reign.

The maps above were made from measurements taken by the Moderate Resolution Imaging Spectroradiometer (MODIS) on the Terra satellite. Such measurements are crucial in helping scientists track what happens to the carbon people release into the atmosphere by burning fossil fuels, as described in our new carbon cycle article:

With more atmospheric carbon dioxide available to convert to plant matter in photosynthesis, plants were able to grow more. This increased growth is referred to as carbon fertilization....There is a limit to how much carbon plants can take out of the atmosphere, and that limit varies from region to region. So far, it appears that carbon dioxide fertilization increases plant growth until the plant reaches a limit in the amount of water or nitrogen available.

Carbon dioxide also increases temperatures, extending the growing season and increasing humidity. Both factors have led to some additional plant growth. However, warmer temperatures also stress plants. With a longer, warmer growing season, plants need more water to survive. Scientists are already seeing evidence that plants in the Northern Hemisphere slow their growth in the summer because of warm temperatures and water shortages.

Read more in The Carbon Cycle on the Earth Observatory. 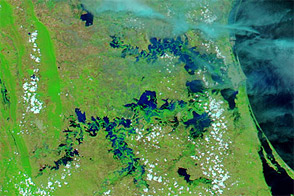