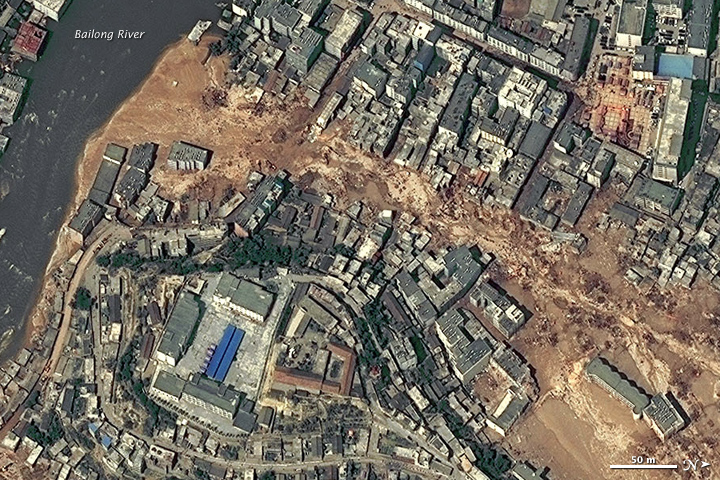 Tucked between the steep slopes of the Min Shan and the Bailong River in northwest China, the city of Zhouqu has a picturesque location. However, the intimidating natural beauty also carries a risk. On August 8, 2010, unusually intense monsoon rains triggered devastating landslides and floods that buried a densely populated area in the center of the city. As of August 17, China’s official news agency reported 1,270 deaths with 474 people still missing. This detailed image, from DigitalGlobe’s WorldView-2 satellite, shows the largest slide in the lower part of the city on August 10.

The slide terminates in a brown fan that extends into the Bailong River. Mud surrounds several of the buildings near the river’s edge and branches into adjacent streets. Some of this mud may have been deposited by flood waters that gathered behind the slide as torrential rain continued to fall. In the large image, which shows a wider area, the dark waters of Bailong River seeps around buildings across from the slide and up the wide road that runs along the river’s edge not far from the slide.

Moving away from the river, the mud has a rougher, more varied texture where the slide channeled through the center of the city. The smooth dark spots are probably water. Light-colored flecks are probably debris. The slide area widens again in the lower right corner, clearly covering blocks of buildings.

Slightly darker than the surrounding mud, streams snake across the surface of the slide. The large image reveals that the landslides followed the course of streams down the mountains and into the valley where Zhouqu was built. On the far right side of the large image, closer to the top of the slide and beyond the right edge of the web image, farmland surrounds the streams. The steep slopes on either side of the streams are bare of vegetation, possibly making them prone to landslides.

Image from WorldView-2 © 2010 by DigitalGlobe. Caption by Holli Riebeek

This detailed image, taken by the commercial WorldView-2 satellite on August 10, 2010, shows the path of a large mudslide through the Chinese city of Zhouqu.