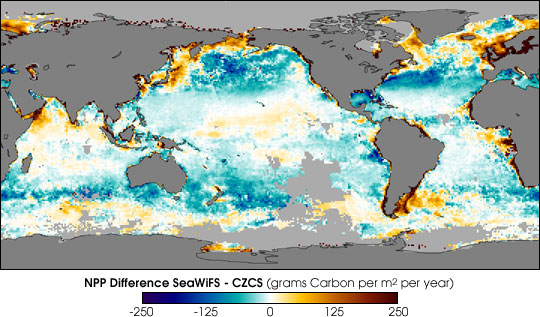 Plant life in the world’s oceans has become less productive since the early 1980s, absorbing less carbon, which may in turn impact the Earth’s carbon cycle. Watson Gregg, a NASA GSFC researcher, finds that the oceans’ net primary productivity (NPP) has declined more than 6 percent globally over the last two decades, possibly as a result of climatic changes. NPP is the rate at which plant cells take in CO2 during photosynthesis, using the carbon for growth.

“This research shows ocean primary productivity is declining, and it may be a result of climate changes such as increased temperatures and decreased iron deposition into parts of the oceans. This has major implications for the global carbon cycle,” Gregg said. Iron from trans-continental dust clouds is an important nutrient for phytoplankton, and when lacking can keep populations from growing.

Gregg and colleagues used two datasets from NASA satellites: one from the Coastal Zone Color Scanner aboard NASA’s Nimbus-7 satellite (1979-1986); and another from the Sea-viewing Wide Field-of-view Sensor on the OrbView-2 satellite (1997-2002).

The satellites monitor the green pigment in plants, or chlorophyll, which leads to estimates of phytoplankton amounts. The older data was reanalyzed to conform to modern standards, which helped make the two data records consistent with each other. The satellite data were blended with surface data from NOAA research vessels and buoys to reduce errors in the satellite records and to create an improved estimate of NPP.

The image above shows the difference in distributions of ocean net primary productivity between 1997-2002 and 1979-1986. Blue hues represent a decline in productivity, while orange hues indicate an increase.

Image by Robert Simmon, based on data provided by Watson Gregg, NASA GSFC