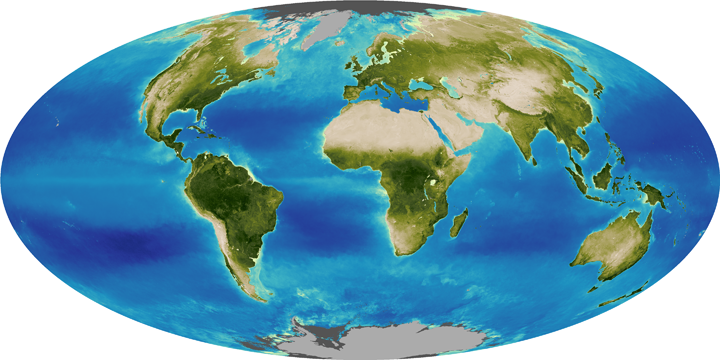 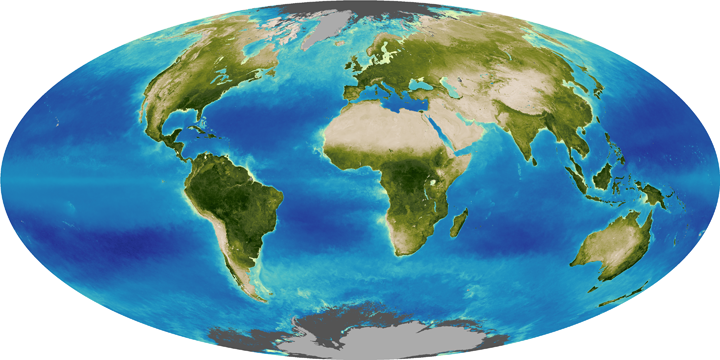 But life is not a constant thing: this pair of images contrasts average plant growth in 2002 to growth in 2008, revealing small interannual changes. The images are part of our series World of Change: Global Biosphere. On land, the highest concentration of plant growth (dark green) tends to be concentrated in tropical regions around the equator, where rainfall and sunlight are abundant. In the ocean, the highest chlorophyll concentrations (yellow) are in cold polar waters or in places where ocean currents bring cold water to the surface, such as around the equator and along the shores of continents. In these regions, tiny plant-like organisms called phytoplankton flourish because the cold water tends to bring nutrients to the surface.

The images are an annual average, so seasonal changes are erased. Instead, the contrast between 2002 and 2008 reveals small differences in weather patterns between the two years. In Australia, for example, 2008 was a far more productive year than 2002. Either plants received more water and mild temperatures during the growing season in 2008 or the winter was less severe. Either way, plants grew more on average throughout the year.

In the ocean, chlorophyll concentrations were higher in the North Atlantic and North Pacific in 2008, but the equatorial Atlantic supported more phytoplankton in 2002. These differences could have many causes. Ocean chlorophyll concentrations can change when ocean currents shift or the temperature changes. A drop in chlorophyll could occur if more zooplankton (small animals) are grazing in an area. Finally, the satellite measurement itself may be influenced by changes in weather patterns. Winds could churn the ocean, pushing phytoplankton below the surface where the satellite cannot measure them, or clouds may block the satellite’s view during short bloom events, when chlorophyll spikes.