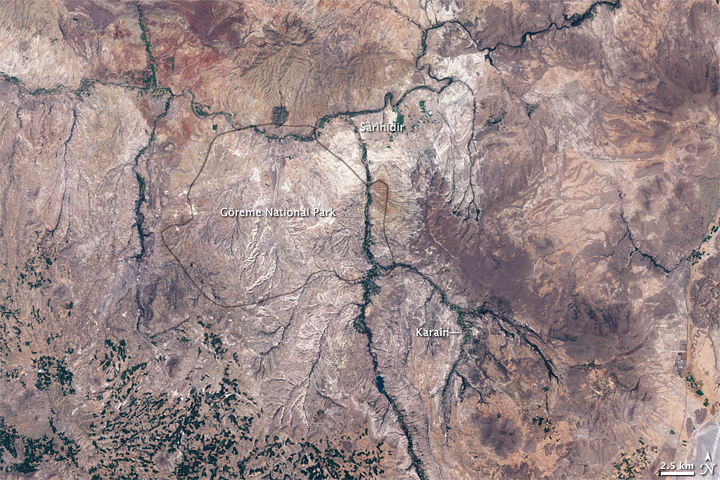 Some 30 million years ago, in what is now central Turkey, volcanoes spewed ash over the landscape. Eventually, the ash solidified into rock, called tuff, tens of meters thick. In the millions of years that followed, wind and water eroded the tuff into odd shapes, including spires, cones, even a camel. In more recent times, a different force went to work on the rocks of this region. The tuff was soft and easily worked, and people made this place home, hollowing out the rocks, and carving windows, doors, and curving stairways. Locals even carved churches into the rock. In 1985 Cappadocia’s Göreme National Park was declared a World Heritage site of the United Nations Educational, Scientific and Cultural Organization (UNESCO).

The Enhanced Thematic Mapper (ETM) on NASA’s Landsat 7 satellite captured this image of Göreme National Park and its surroundings in Cappadocia on August 13, 2002. A black outline delineates park boundaries. Although the satellite’s perspective doesn’s quite match the spectacular scenery from the ground, Göreme’s rugged landscape is obvious, with light and shadow highlighting the peaks and valleys.

This photo-like image shows the region in variegated earth tones, punctuated by the deep green of vegetation-lined waterways and irrigated fields in the south. Sometimes described as a “moonscape,” Cappadocia rests in Turkey’s Central Anatolia region—a high plateau of steppes and mountains. This arid region experiences only about 38 centimeters (15 inches) of annual rainfall, which is enough to support summer and winter wheat and other crops.

Göreme National Park is named for the settlement of Göreme, where many people continue to live in the hollowed-out tuff formations. Similar lifestyles persist in other Cappadocian villages, but some villages have witnessed epidemics of mesothelioma, a form of cancer linked to exposure to erionite. Common in tuff formations, erionite is a mineral with a texture like wool fibers, and it is known to cause cancer. Epidemiologists linked the local rocks to mesothelioma in the 1970s, after studies conducted in the village of Karain. Two other villages, Tuzkoy (not shown) and Sarihidir, also showed high rates of mesothelioma, but scientists were perplexed by the sporadic nature of the disease, with only some families succumbing to it. A 2007 paper in Nature Reviews Cancer concluded that people who developed mesothelioma from exposure to the fibrous mineral also had a genetic predisposition to develop the disease. Turkey’s government is making efforts to provide the most vulnerable families alternate housing.