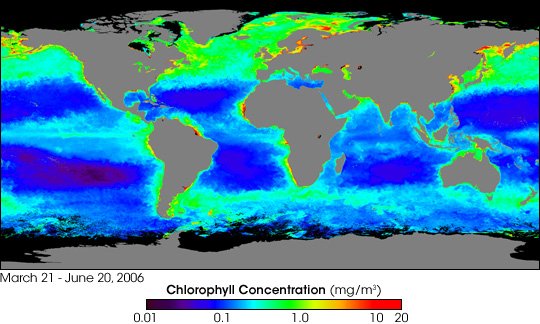 Bright greens, yellows, and reds indicate that the northern oceans were alive with plant life in the spring of 2006. This image shows chlorophyll concentrations as measured by the Sea-viewing Wide Field-of-view Sensor (SeaWiFS) satellite and the Moderate Resolution Imaging Spectroradiometer (MODIS) on NASA’s Aqua satellite between March 21 and June 20, 2006. Observations of global chlorophyll patterns tell scientists where ocean surface plants are growing, which is an indicator of where marine ecosystems are thriving. These surface plants, called phytoplankton, are the base of the food chain, and regions that support large phytoplankton blooms also tend to support a diverse marine population. Such global maps also give scientists an idea of how much carbon the plants are soaking up, which is important in understanding the global carbon budget.

Phytoplankton live in the surface waters of the ocean, where they soak up sunlight and carbon dioxide and convert them into food. In addition to light, the plants also need nutrients like iron and nitrogen, which come from run-off in rivers, wind-blown dust, or from the ocean floor, carried to the surface on upwelling currents. Not surprisingly, high chlorophyll concentrations line the coasts where such nutrients wash into the ocean from the land. Upwelling is also more common in coastal regions, where the temperature difference between land and ocean fuels the winds that stir the ocean surface and drive upwelling.

Phytoplankton were also thriving in the northern oceans during the spring. During the winter, ocean waters are cold at the surface. This means that the temperature difference between surface waters and deep waters is small, and the water can mix vertically. Rising deep water brings nutrients to the surface across the North. When sunlight returns to the far north in the spring, the surface waters have both light and nutrients, and plants thrive. As the plants use available nutrients, the annual bloom fades away until the right conditions return the next year.