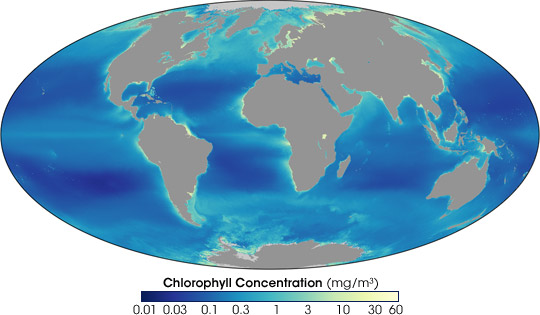 It may seem obvious that life is distributed across Earth in uneven patches: lush forests teem with life, while barren deserts support a relatively small number of specialized plants and animals. But scientists have only started to glimpse the pattern of life in Earth’s oceans with the advent of Earth-orbiting satellites, and the greatest contribution has come from a small satellite called the Sea-viewing Wide Field-of-View Sensor (SeaWiFS). Designed to orbit the Earth for five years collecting information about the oceans, SeaWiFS entered its eleventh year of operation in September 2007. Along with its predecessor, the Coastal Zone Color Scanner, the satellite provided scientists their first view of how plants are distributed across the globe’s oceans and revealed that, like land, the oceans contain rainforest-like areas where plants proliferate and desert-like areas where fewer plants grow. SeaWiFS also mapped out the relationship between ocean plants and temperatures, currents, and weather patterns, and it offered insight into the role of ocean plants in removing carbon dioxide from the atmosphere.

A decade of observations from the SeaWiFS satellite are represented in this image, which shows average chlorophyll concentrations in Earth’s oceans from mid-September 1997 through the end of August 2007. Areas where plants thrive are light blue and yellow, while less productive regions are dark blue. The satellite records the amount of light that chlorophyll is soaking up as the plant converts light, water, and carbon dioxide into glucose and oxygen through photosynthesis. In general, high chlorophyll concentrations correspond with a high number of healthy plants.

The distribution of plants in the ocean is driven by currents and temperature. Surface currents around the Equator, for example, push away from each other (diverge), creating a well where nutrient-rich water can rise to the surface. Plants flourish in the combination of sunlight and nutrients, as illustrated by the pale blue band that circles the Earth at the Equator. Cool, nutrient-rich water also rises to the ocean’s surface along the edges of continents, creating the line of productive waters along the west coasts of Africa and North, Central, and South America. The combination of interacting currents and deep water pushing up along the continental shelf gives rise to productive waters off the southeastern tip of South America.

The final global pattern revealed in this image is the relationship between temperature and productivity. In general, warm water suppresses upwelling because warm surface waters are more buoyant than denser deep water. This difference in density makes it difficult for nutrient-laden cold water to rise to the surface: the lighter warm water will always want to float over it. As a result, the surface water in warm regionst ends to be nutrient poor and unable to support very many plants. Where the surface water is cool, the difference in density between the layers of the ocean is smaller, so it is easier for nutrient-rich layers from lower in the ocean to rise to the surface where plants grow.

This global relationship between temperature and productivity was one that scientists first observed in SeaWiFS data and is illustrated in this image. The places with the lowest chlorophyll concentrations are in the sun-baked tropics, while the cold waters in the Arctic and Antarctic have high chlorophyll concentrations. What the image does not show is that the growth at the poles is seasonal. The plants only flourish during the spring and summer when there is sufficient light to fuel photosynthesis. Since the image is a composite, made with data collected every day over a period of ten years, it erases all seasonal patterns.

Apart from revealing patterns of productivity, SeaWiFS’ observations are helping scientists understand the role of the ocean’s plants in removing carbon from the atmosphere. Tiny ocean plants that grow at the ocean’s surface—phytoplankton—soak up more carbon dioxide than anything else on Earth, including dense tropical forests. Since ocean plants remove so much of the greenhouse gas from the atmosphere, they play an important role in mitigating global warming.

NASA image by Robert Simmon, based on SeaWiFS data.