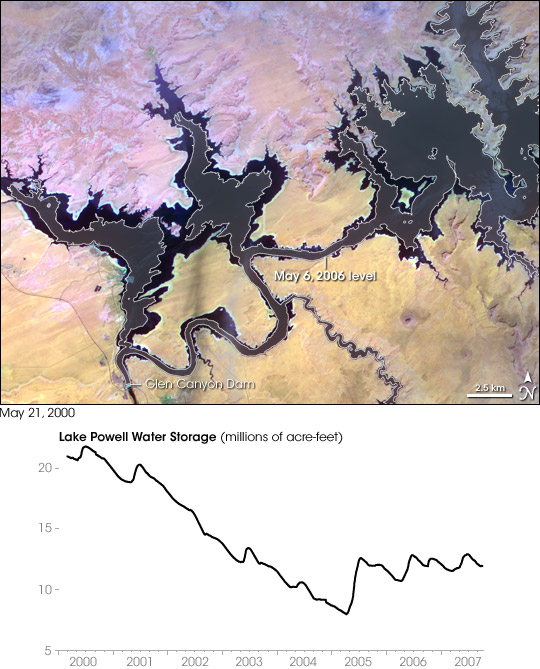 The Advanced Spaceborne Thermal Emission and Reflection Radiometer (ASTER) on NASA’s Terra satellite acquired this image of part of Lake Powell upstream from the Glen Canyon Dam on May 21, 2000, just as the drought was beginning. Superimposed onto the image are water levels from May 6, 2006, when the water level had declined. The 2006 water level appears in a slightly lighter shade of blue, outlined in white, on the water surface.

The graph shows Lake Powell’s water level from 2000 to 2007, measured in millions of acre-feet. This measure of lake volume counts the acres of land surface covered by a foot of water. The water level from May 2006, superimposed onto the satellite image, had actually rebounded somewhat from the 2005 low. After peaking in late 2000 with more than 20 million acre-feet, the reservoir’s water level sharply declined to roughly 8 million in mid-2005.

Lake Powell is the second-largest artificial reservoir in the United States, after Lake Mead. Both reservoirs suffered declines in the early years of the twenty-first century, thanks to prolonged drought. Lake Mead had fallen more than 60 feet (about 20 meters) between 2000 and 2003. Drought conditions in the American Southwest could worsen in a warming climate.

Controversy courted the Glen Canyon Dam from the time of its construction in the 1950s. Although the dam provided a reliable water source for millions of Americans, rising waters obscured the geology and archeology of the Glen Canyon, and caused the extinction of Grand Canyon fish species downstream. For admirers Glen Canyon geology, however, the 2005 drought had an upside; dropping water levels revealed some of the local geology.

You can download a 15-meter-resolution KMZ file of Lake Powell comparing May 2000 and 2006 suitable for use with Google Earth.

Water levels at Glen Canyon Dam have fallen to their lowest level since 1969 and are still dropping.