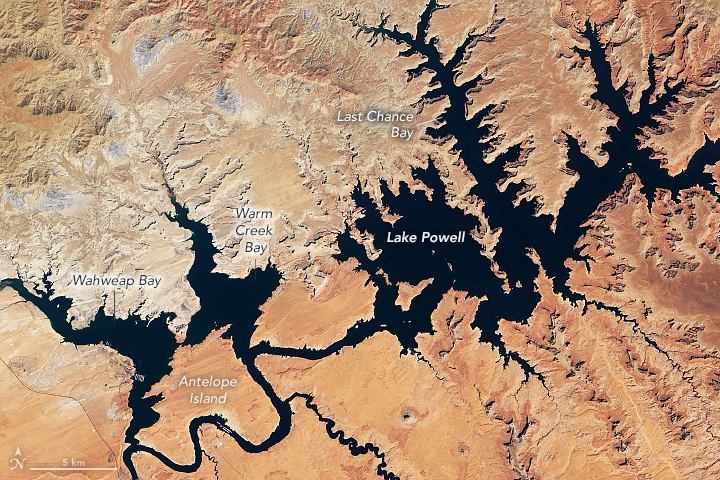 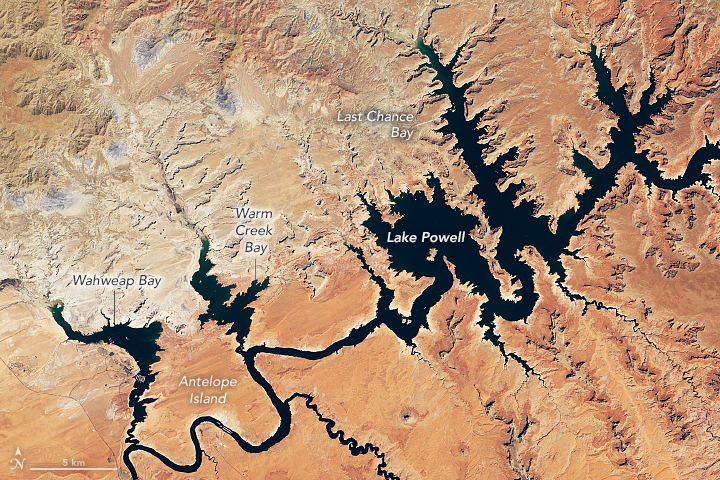 As North America approaches the end of the 2021 water year, the two largest reservoirs in the United States stand at their lowest levels since they were first filled. After two years of intense drought and two decades of long-term drought in the American Southwest, government water managers have been forced to reconsider how supplies will be portioned out in the 2022 water year.

Straddling the border of southeastern Utah and northeastern Arizona, Lake Powell is the second largest reservoir by capacity in the United States. In July 2021, water levels on the lake fell to the lowest point since 1969 and have continued dropping. As of September 20, 2021, the water elevation at Glen Canyon Dam was 3,546.93 feet, more than 153 feet below “full pool” (elevation 3,700 feet). The lake held just 30 percent of its capacity. To compensate, federal managers started releasing water from upstream reservoirs to help keep Lake Powell from dropping below a threshold that threatens hydropower equipment at the dam.

The natural-color images above show Lake Powell in the late summer of 2017 and 2021, as observed by the Operational Land Imager on Landsat 8. The September 2017 image was chosen because it represents the highest water level (3,630.76 feet) from the past decade. The line plot below shows water levels since 1999, when Lake Powell approached 94 percent capacity.

Downstream in the Colorado River water management system, Lake Mead is filled to just 35 percent of capacity. More than 94 percent of the land area across nine western states is now affected by some level of drought, according to the September 23 report from the U.S. Drought Monitor.

In an announcement on September 22, the U.S. Bureau of Reclamation (USBR) explained that updated hydrological models for the next five years “show continued elevated risk of Lake Powell and Lake Mead reaching critically-low elevations as a result of the historic drought and low-runoff conditions in the Colorado River Basin. At Lake Powell, the projections indicate the potential of falling below minimum power pool as early as July 2022 should extremely dry hydrology continue into next year.” Minimum power pool refers to an elevation—3,490 feet—that water levels must remain above to keep the dam’s hydropower turbines working properly.

With the entire Lower Colorado River water storage system at 39 percent of capacity, the Bureau of Reclamation recently announced that water allocations in the U.S. Southwest would be cut over the next year. “Given ongoing historic drought and low runoff conditions in the Colorado River Basin, downstream releases from Glen Canyon Dam and Hoover Dam will be reduced in 2022 due to declining reservoir levels,” the USBR statement said. “In the Lower Basin the reductions represent the first “shortage” declaration—demonstrating the severity of the drought and low reservoir conditions.” 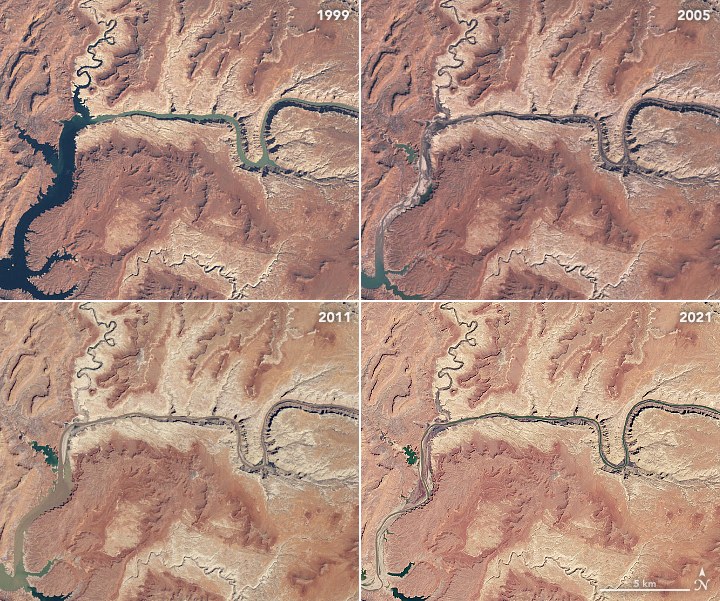 The natural-color images above were acquired in March 1999, April 2005, May 2011, and April 2021 by the Landsat 5, 7, and 8 satellites. Springtime typically marks the lowest water levels before mountaintop snow starts to melt and run down into the watershed. The images capture years with the two highest and lowest levels over the past 22 years. (For a year-by-year view, see the Earth Observatory feature World of Change: Water Level in Lake Powell.)

The Colorado River basin is managed to provide water to millions of people—most notably the cities of San Diego, Las Vegas, Phoenix, and Los Angeles—and 4 to 5 million acres of farmland in the U.S. and Mexico. Water is allotted through laws like the 1922 Colorado River Compact and by a recent drought contingency plan announced in 2019.

In a report and op-ed released on September 22, members of a NOAA Drought Task Force offered some context for the low water levels across the region. “Successive dry winter seasons in 2019-2020 and 2020-2021, together with a failed 2020 summer southwestern monsoon, led precipitation totals since January 2020 to be the lowest on record since at least 1895 over the entirety of the Southwest. At the same time, temperatures across the six states considered in the report (Arizona, California, Colorado, Nevada, New Mexico and Utah) were at their third highest on record. Together, the exceptionally low precipitation and warm temperatures reduced snowpack and increased evaporation of soil moisture, leading to a persistent and widespread drought over most of the American West.“

Water levels at Glen Canyon Dam have fallen to their lowest level since 1969 and are still dropping.