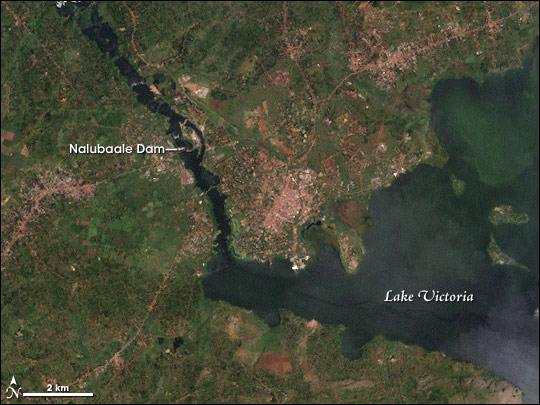 Stretching across the boundaries of Uganda, Kenya, and Tanzania, Lake Victoria is Africa’s largest lake. Unlike the lakes that surround it, some which are among the deepest in the world, Lake Victoria is shallow. Most of the water that flows into the lake comes from rain falling directly over its broad surface. As a result, water levels on the lake rise and fall with seasonal rains. But in late 2005, a NASA satellite detected a drop in the water levels in Lake Victoria that may be due as much to the growing population’s demand for electricity as to rainfall fluctuations.

This image from the Enhanced Thematic Mapper Plus sensor on the Landsat 7 satellite shows a bay on the northern shoreline of Lake Victoria near the town of Jinja, Uganda. The scene also shows the dam across the lake’s sole outlet, the White Nile River, which flows toward the upper left of the image. The dam was once called Owens Falls Dam, but today is known as the Nalubaale Dam. Developed areas and roads are mixed with the green vegetation of the area. The image was captured on November 27, 2001.

In the past, water levels on Lake Victoria were moderated by a natural rock dam on the north side of the lake. Rising lake waters would spill over the natural dam into the White Nile, which flowed through Uganda, Sudan, and Egypt before emptying into the Mediterranean Sea. When water levels dropped too low, flow into the river ceased. In 1954, the rock dam was replaced with a man-made dam built to generate power. A treaty between Uganda and Egypt ensured that the natural flow of the Nile would not be altered by the dam. The dam maintained water levels until 2005, when the lake suddenly plunged.

The radar altimeter on NASA’s Jason-1 satellite measured the rapid drop in water levels as part of a partnership between NASA and the U.S. Department of Agriculture’s Foreign Agricultural Service to monitor water availability on the world’s lakes. By early 2006, Jason-1 revealed that Lake Victoria had reached lows not seen since the 1920s.

The reasons for the drop may be two-fold. First, the region around Lake Victoria is in the grip of drought. The short rainy season, which typically falls between October and December, produced little rain in 2005, so water levels would have dropped naturally. But the lack of rainfall may not be the only reason water levels fell. In early 2006, environmental groups and some Ugandan water officials told the media that the power company operating the dam on the White Nile may have pushed too much water through to meet rising demands for electricity. Because 30 million people rely on Lake Victoria for fishing, transport, electricity, and tourism, the drop in water levels had a big impact on the region. To read more about the drop in water levels on Lake Victoria, see “Lake Victoria’s Falling Waters” on the Earth Observatory.

Download Nalubaale Dam KML file for use with Google Earth.