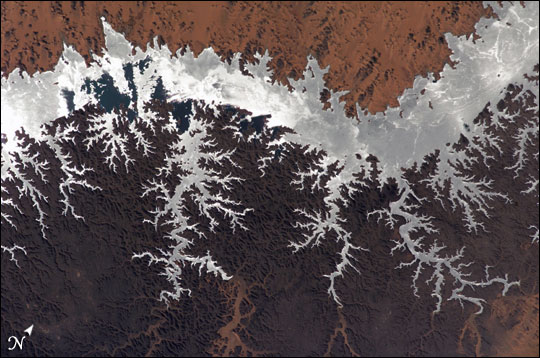 The Aswan High Dam, which created this massive lake, is the newer of two dams in the vicinity. The older of these dams is known as the Aswan Low Dam, or simply the Aswan Dam. Completed in 1902, the older dam had nearly overflowed by the middle of the 20th century, despite having been raised twice. Instead of raising it a third time, officials chose to build the Aswan High Dam upriver in the 1960s. The dam proved to be a mixed blessing, providing some residents with irrigation and drinking water, but forcing thousands of others to relocate to higher ground.

The Aswan High Dam ultimately proved much more effective than its predecessor, so effective that the dam’s construction spawned another massive effort. The ancient Egyptian temple of Abu Simbel lay in the path of the rising waters produced by the new dam. In the 1960s, the historical site was literally taken apart piece by piece and reassembled in a new place to avoid submersion. The Aswan High Dam has not, however, proven immune to overflowing. High levels of rainfall led to new lakes in the region in the late 1990s.

The name of Lake Nasser technically refers only to the portion of this lake in Egypt. The Sudanese prefer to call their portion of the lake Lake Nubia.

Astronaut photograph ISS010-E-14618 was acquired January 23, 2005, with a Kodak 760C digital camera with a 400 mm lens, and is provided by the ISS Crew Earth Observations experiment and the Image Science & Analysis Group, Johnson Space Center. The International Space Station Program supports the laboratory to help astronauts take pictures of Earth that will be of the greatest value to scientists and the public, and to make those images freely available on the Internet. Additional images taken by astronauts and cosmonauts can be viewed at the NASA/JSC Gateway to Astronaut Photography of Earth.

Lake Sarez, deep in the Pamir mountains of Tajikistan, was created 90 years ago when a strong earthquake triggered a massive landslide that, in turn, became a huge dam along the Murghob River, now called the Usoi Dam. The resulting lake is perched above surrounding drainages at an elevation greater than 3000 meters. The lake is 61 kilometers long and as deep as 500 meters, and holds an estimated 17 cubic kilometers of water. The area experiences considerable seismic activity, and scientists fear that part of the right bank may slump into the lake, creating a huge wave that will top over and possibly breach the natural dam. Such a wave would create a catastrophic flood downstream along the Bartang, Panj and Amu Darya Rivers, perhaps reaching all the way to the Aral Sea.

The vast dam in southern Egypt is one of the largest earthen embankment dams in the world.