Warm Waters in the Chesapeake 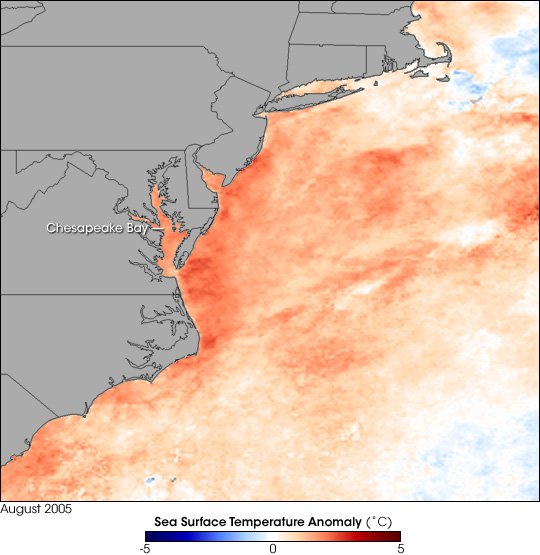 Compared to recent summers, 2005 was a warm one for the Chesapeake Bay. This image reveals how the temperatures in August 2005 differed from the average August temperatures in the previous three summers (2002-2004). Red areas show where temperatures measured by Moderate Resolution Imaging Spectroradiometer (MODIS) on NASA’s Aqua satellite were higher in 2005 than they were on average in previous summers, while blue areas show where temperatures were cooler. Temperatures appear to have been up across a broad stretch of the mid-Atlantic. Although the Aqua MODIS data record only goes back to 2002, measurements made at Chesapeake Bay mainstem and tributary monitoring stations also reveal that temperatures in many parts of the Bay were at the upper limit of the range of temperatures that have been recorded at these stations over the past two decades.

Warm water holds less dissolved oxygen than cool water, so widespread high temperatures can lead to stress on marine life. In addition, high temperatures can interact with other ecosystem factors to cause stress on the Bay’s inhabitants. One of these interactions is called the “temperature-dissolved oxygen squeeze.” Fish who are less tolerant of warm waters will try to move into cooler, deeper water in the Bay. However, each summer, the dissolved oxygen in a portion of the deep waters of the Bay becomes depleted due to the decay of algae and other phytoplankton in the water. Some areas have virtually no dissolved oxygen. Fish can become “squeezed” between too-warm surface waters and oxygen-depleted deep water. In 2005, the oxygen-depleted

Since July 2005, scientists from NASA’s Goddard Space Flight Center have been delivering MODIS observations of the Chesapeake Bay to the Maryland Department of Natural Resources (DNR) as part of the agency’s “Eyes on the Bay” monitoring program. Among the conditions MODIS observes in the Bay are sea surface temperature, chlorophyll concentration (an indication of algae and other phytoplankton), and water clarity. According to Mark Trice, who spearheads the use of MODIS data at the DNR, the agency has used MODIS chlorophyll observations to confirm potentially harmful algal blooms in areas where they might not typically collect water samples. Early in the summer, a Chesapeake Bay fisherman died as a result of infection with a species of warm-water bacteria that typically only exists in very low concentrations in the waters of the Bay. MODIS sea surface temperature data helped to document that temperatures in the Bay were high enough across a large enough area this summer to have created more favorable growing conditions for the infectious organism.