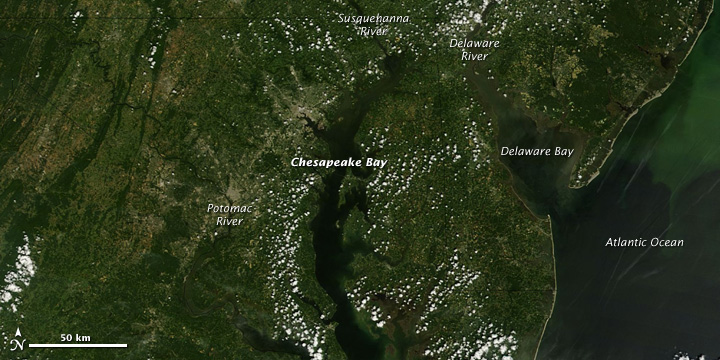 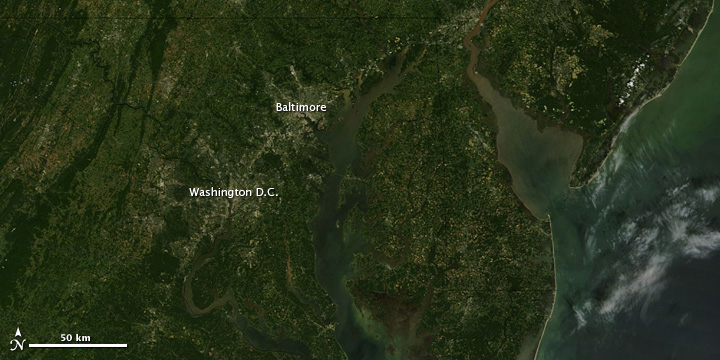 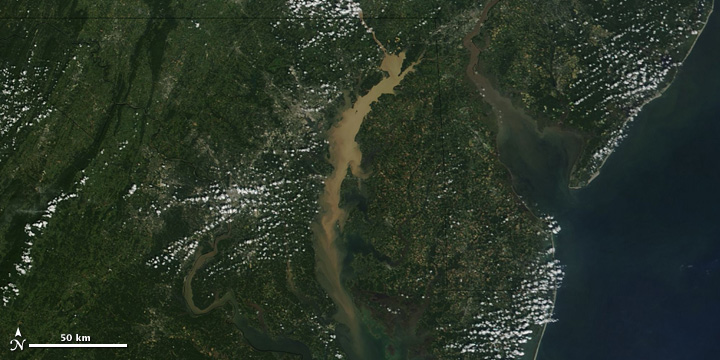 Water poured from the Susquehanna River into Chesapeake Bay at a near-record rate on September 9, 2011, after the remnants of Tropical Storm Lee doused the watershed with heavy rain. The ensuing floods swept up debris, garbage, sewage, farm runoff, and mud and carried all of it down rivers and streams into Chesapeake Bay. Since records began in 1967, only two other events have carried more fresh water into the Bay: Tropical Storm Agnes in 1972 and a snowmelt event in 1996.

The muddy influx covers much of the top half of the Bay in an image (3rd) taken by the Moderate Resolution Imaging Spectroradiometer (MODIS) on NASA’s Terra satellite on September 13. The top image shows the Bay in its normal condition on August 23, and the center image shows the Bay on August 30 after Hurricane Irene passed through. The image series illustrates that rain from the Tropical Storm Lee had a far greater impact on the bay than Hurricane Irene.

In the middle image from just after Irene, some sediment clogs the Bay, turning water that is ordinarily black in satellite imagery to brown and green. After Lee, however, the Bay is muddy tan, an indicator that thick sediment clouds the water. Resource managers use images like these, along with other satellite data to help gauge the extent of runoff events, says Mark Trice from the Maryland Department of Natural Resources. Satellite data also help managers confirm readings taken from boats and measuring stations.

The soup of mud and debris is bad for the Bay for many reasons. The mud smothers marine life like oysters and damages grasses and other habitat on the Bay floor. The incoming fresh water replaces the brackish water that many ecosystems require. When rain from Tropical Storm Agnes flooded the Bay in 1972, the entire biological community was disrupted, and oysters and soft-shell clams were particularly hard hit. The flooding from Lee was less severe than Agnes, so the impact may not be as extreme.

Along with the mud, the flood waters carry dissolved fertilizers and other pollutants that can feed large phytoplankton blooms. When the blooms die, the phytoplankton sink and decay; as microorganisms consume the plankton, they also consume much of the oxygen in the deeper portions of the Bay. In many of these areas, called dead zones, oxygen levels are so low that aquatic life cannot survive. Such dead zones develop every summer in the Chesapeake Bay.

In 2011, the Maryland Department of Natural Resources recorded low oxygen levels in 30 to 40 percent of the Maryland portion of the Bay—a much larger dead zone than average. Hurricane Irene stirred the water and dissipated the dead zone, but the run-off from Lee may trigger a second eutrophication event. Fortunately, the extreme runoff occurred in early September, when the cooling water will mix more easily and push oxygen into the dead zones. However, the nutrient-filled runoff from Tropical Storm Lee may seed the development of next summer’s dead zone. 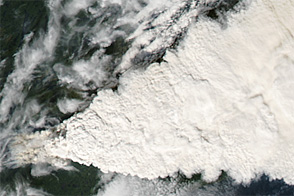