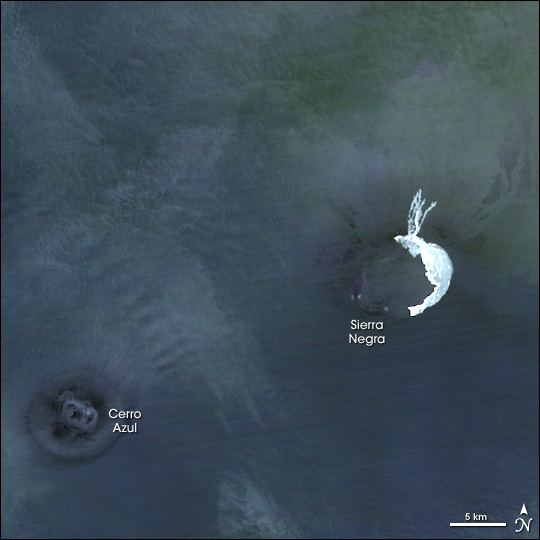 The Sierra Negra Volcano in the Galapagos Islands began erupting on October 22, 2005. In early November, Sierra Negra’s lava flow was so hot it could be seen at night—by a thermal infrared satellite sensor, that is. On November 2, 2005, the Advanced Spaceborne Thermal Emission and Reflection Radiometer (ASTER) flying onboard NASA’s Terra satellite captured this nighttime image of the volcano.

This false-color image shows the summits of the Sierra Negra Volcano (“Black Mountain Range”) in the east and the Cerro Azul (“Blue Hill”) in the southwest. These volcanoes form part of the largest island in the Galapagos: Isla Isabela. All the other major islands in the Galapagos are single volcanic summits reaching just above sea level. Isla Isabela, the archipelago’s largest island, is a conglomeration of six volcanic summits all merged together. Most remarkable about this image is the lava flow from Sierra Negra—hot enough to stand out from the surrounding landscape. It is the white splotch on the northeast side of the volcano’s summit. As this image shows, some threads of lava have broken away from the large mass and flowed farther downhill.

The volcanoes of the Galapagos Islands are among the world’s most active, some of them still building islands now. The volcanoes are shield volcanoes: giant mounds of hardened lava flows. When new lava flows erupt, ASTER’s thermal infrared channels detect those flows by looking at a different part of the light spectrum than what human eyes see. What ASTER “sees” is what we would feel as heat—in this case, intense, deadly heat. Once the lava cools, however, it adds to the underlying volcano, perhaps eventually providing a habitat for Galapagos wildlife.

The Galapagos Islands became famous as the site that inspired the 19th-century naturalist Charles Darwin to develop his theory of natural selection. Today, the animals that live on these islands—giant tortoises, land and marine iguanas, albatrosses, and red-footed, blue-footed, and masked boobies—count among the world’s most unusual and colorful species. As of early November 2005, the spate of volcanic activity had not endangered Isla Isabela’s unique wildlife or human inhabitants. The volcano had, however, produced a substantial quantity of sulfur dioxide, leading to the formation of volcanic smog in the surrounding region.