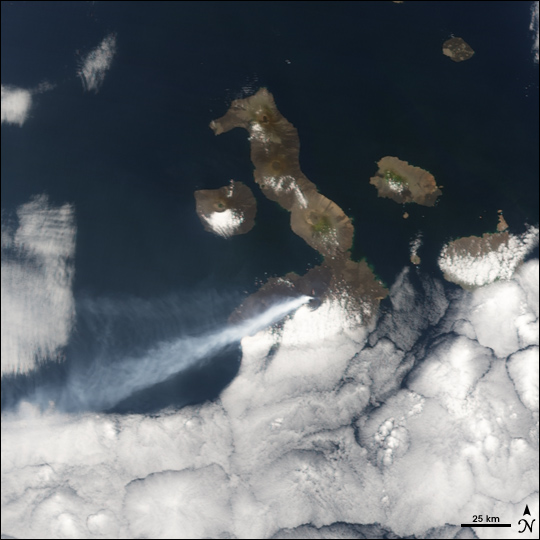 On October 22, 2005, the Sierra Negra Volcano on Isla Isabela in the Galapagos Islands began erupting, sending ash as high as 12,800 meters (42,000 feet), according to the U.S. Geological Survey. Subsequent satellite observations estimated the cloud height at 7,600 meters (25,000 feet). Three days later, the volcano continued to erupt. On October 25, the Moderate Resolution Imaging Spectroradiometer (MODIS) flying onboard the Terra satellite captured this image.

This image shows a strong plume of volcanic ash and steam flowing from the Sierra Negra Volcano on Isla Isabela and blowing to the southwest over the Pacific. The lava flow produced by the same eruption, however, flowed down the volcano’s northeast flank, according to ABC News. The direction of the lava flow threatened neither humans, whose village rested on the south flank of the volcano, nor the island’s famous wildlife. As a precaution, authorities stood ready to evacuate the island’s inhabitants if conditions changed.

The Galapagos Islands are a collection of volcanic summits poking their heads above sea level along the equator, west of South America. With the exception of Isla Isabela, each major island consists of a single volcanic summit. Isla Isabela, the largest in the archipelago, is composed of six volcanoes that merged above the water, including Wolf Volcano, Darwin Volcano, Alcedo Volcano, and Sierra Negra Volcano. These volcanoes are all shield volcanoes shaped like flattened domes with very gentle slopes. In contrast to volcanoes built from a combination of lava, rock, and ash flows, shield volcanoes are built exclusively from lava flows. Hardened black lava characterizes the islands, and the Sierra Negra’s name translates as “Black Mountain Range.”

Geologically speaking, the islands are young, ranging in age from hundreds of thousands to several millions of years old. Some volcanoes are still forming, and the Galapagos remain one of the world’s most volcanically active regions. No land bridges have ever connected these volcanic summits to another landmass, and the nearest continent is several hundred miles away. The 19th-century naturalist Charles Darwin visited the Galapagos during his voyage on the Beagle in the 1830s. Puzzling over the plants and animals that populated these islands, such as giant tortoises, finches, and iguanas, helped Darwin develop his theory of natural selection.

On October 22, 2005, the Sierra Negra Volcano on Isla Isabela in the Galapagos Islands began erupting. On October 26, the Moderate Resolution Imaging Spectroradiometer (MODIS) flying onboard the Aqua satellite captured this image as the volcano erupted for its fourth straight day.