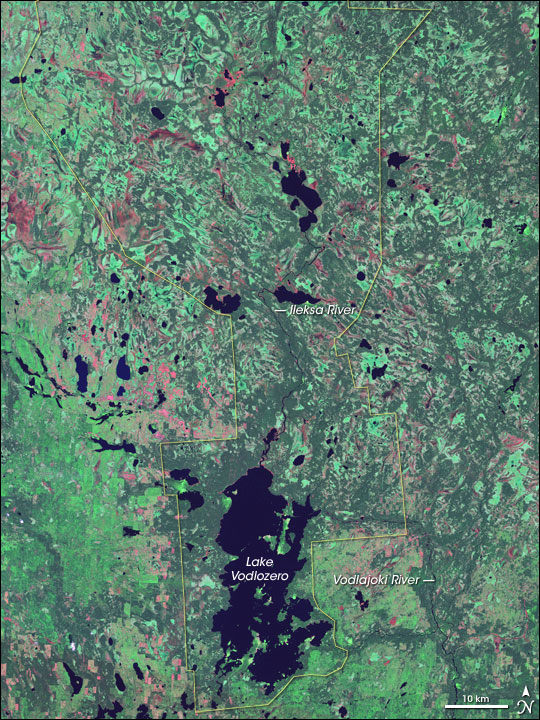 Vodlozero National Park lies in Northern European Russia along the borders of the Karelian Republic and Arkhangelsk Region. It’s somewhat remote location, low density of surrounding population, and high latitude (where polar air circulation patterns tend to buffer it from atmospheric pollution from lower latitudes), and a legacy of conservation has resulted in the park having a pristine virgin (largely unmodified by man) state unusual amongst European conservation areas, where typically long histories of settlement have altered the landscape. Virtually all of the park is in state known as “climax ecosystem”, meaning that the ecosystems are in natural equilibrium with maximum sustainability. The dominant ecosystem is forest, containing both northern plain and middle Eurasian taigi species. Trees here are typically 200-280 years old, and some have been found as much as 600 years old. The next most dominant ecosystem is wetlands, which consistute some 41 per cent of the park. Their extent and lack of anthropomorphic disturbance results in remarkably clean waters in the Ileksa River, which drains from this region, and Lake Vodlozero within the park. These wetlands are of particular importance as they sit on the migration routes of a vast number of birds and provide nesting grounds for a wide variety of waterfowl. Other species typical of the taiga, such as brown bears, badgers, martens, lynx, and European mink are also found in considerable abundance in the park region.

This false-color Landsat image shows the southern two thirds of the park. The long north-south extent and overall large size makes it impossible to gather the entire park from a single Landsat satellite pass. The entire park takes in 500,000 hectares (1.2 million acres) of land and lake. The most obvious feature in this image is the deep blue of Lake Vodlozero. In this false-color imagery, forests appear either deep or pale green depending on the dominant tree species: a clear differentiation between the deep green dominant pattern in the southern part of the park and the mostly pale green in the more northern regions shows an apparent latitudial speciation. The landscape is riddled with small lakes. Red tones show area where vegetation is less green (less chlorophyll): two patterns of this color tone appear in the image. Inside the park, wavey features with long sinusious curves show swamp areas and follow the shape of the predominately flat land and lead into lakes and ultimately the Ileksa River which drains southward into Lake Vodlozero and out through Vodlajoki River to Lake Onega to the south and west of the park, ultimately leading to the Gulf of Finland. Grid square red areas, which appear outside the park boundaries, particular to the south and west of the park, are agricultural fields in which crops have either been recently harvested, left fallow, or in which the planted crop is a late growing species which has not yet grown in significantly.

This image is a mosaic of two adjacent Landsat 7 images acquired by the Enhanced Thematic Mapper Plus (ETM+) instrument. Most of the scene shown is from data obtained on June 7, 2000. The sloping linear transition to a subtlely darker toned area shows where the southern portion of the scene was stitched into this image using an additional ETM+ observation from May 28, 2002. These images used data from the shortwave infrared, near infrared, and green wavelengths (ETM+ bands 7, 4, & 2).