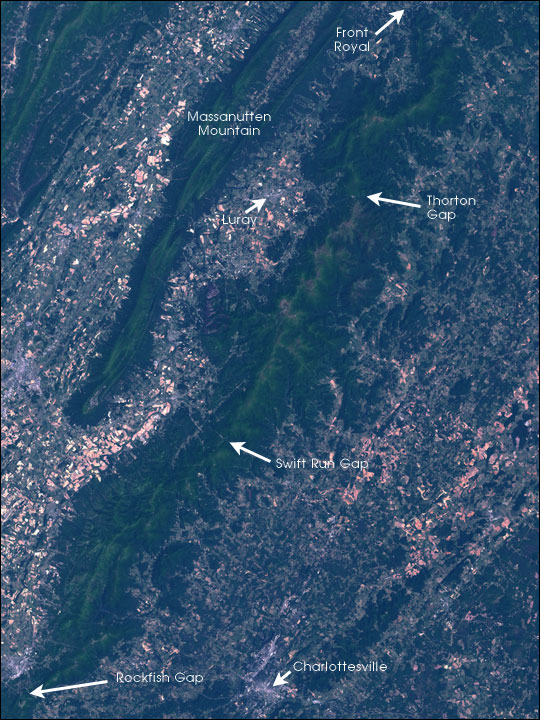 The Shenandoah National Park stretches through the Blue Ridge Mountains in northern Virginia. The area was first set aside as a National Park in 1935 after many years of effort. One aim was to create a substantial national park similar to those previously created in the West, but located nearer to the population centers of the U.S. East Coast. The park idea was developed gradually before 1935, with some land acquisitions for a 100-foot right-of-way along the ridgeline for the creation of Skyline Drive. The scenic highway paralleled and displaced in palces the then-recent Appalachian Trail, a 2144 mile long "super trail" running from Georgia to Maine that was created in 1926. Some large areas were made available from willing large landowners, including President Herbert Hoover whose fishing camp at Rapidan River was included in the proposed park area, but other land owners fought park land condemnation. With the coming of the Great Depression, the Civilian Conservation Corp (CCC) was established and eleven construction camps were established in the park to help create the 105-mile long Skyline Drive through the center of the park.

The park now encompasses about 200,000 acres of land, divided into three sections. The northern part runs from Front Royal to Thornton Gap where a major highway cuts through the ridge to connect the town of Luray with the towns east of the park. The central section spans from Thornton Gap down to Swift Run Gap where another road crosses through the park. Finally the southern section runs to Rockfish Gap where the Interstate Highway 66 runs out of Charlottesville and into the hills of West Virginia. South of Rockfish Gap, Skyline Drive meets the Blue Ridge Parkway, a road that continues along the ridgeline of this first range of the Appalachian Mountains. Beyond the park’s southern boundary, the land is no longer consistently public (save for the right-of-way corridors for the Appalachian National Scenic Trail and the Blue Ridge Parkway) until reaching the Smoky Mountain National Park, which straddles the border of North Carolina and Tennesse.

The land in the park is of mixed type, reflecting its history and incorporation into the park. Roughly forty percent is maintained as wilderness areas with no road access or facilities; these are areas designated in the Wilderness Act as places "retaining its primeval character". Visitors are required to practice Leave-No-Trace ethics, and while camping and hiking are permitted in Wilderness areaa, they are subject to limits to minimize the impact of human presence.

All parts of the park maintain some archaeological remains from over two hundred years of European settlement in the park area prior to its national park declaration. This includes the foundations of abandoned homes of some mountain settlers who were forced to relocate when the park was created. In some places, hikers can stroll from forest into an abandoned apple orchard and know they are treading in former farmland. The area was also used for some ten thousand years prior as hunting and fishing grounds with some settlements by native American populations, and traces of their presence can still be found in the park as well.

This satellite image of the park reflects this heritage. The park is a skinny long shape running roughly northeast to southwest from Front Royal to Waynesboro at Rockfish Gap (just off the edge of this image) roughly centered on the main ridgeline on which Skyline Drive runs. It is much wider than the mere 100-foot right-of-way, but retains the shape defined somewhat by the route of Skyline Drive. Numerous scenic-view turnoff spots on the road, built by the CCC, look down on the Shenandoah Valley to the west and across to Massanutten Mountain, or else eastward towards Washington, D.C. and Richmond, Virginia. It is said that in the early years of the park, on a clear day it was possible to see the Washington Monument some one hundred or so miles away. In modern times, atmospheric smog and haze have robbed these views of some of their majestic breadth. Stands of trees in the park remain from when boreal forests retreated southward along the Appalachian ridgeline during the last major ice age, and now are gradually moving northward with global warming. Thus there are stands of trees more usually associated with southern Canada, such as stately hemlocks and balsam firs. The park appears as a deep rich green of forest contrasting with the lighter farmland in the valleys on either side, and the grey concrete of roads and city buildings. Much of the farmland still appears fallow in this late spring image as summer crops have not yet fully grown in.

This image was acquired by Landsat 7's Enhanced Thematic Mapper plus (ETM+) sensor on May 24, 2002. This natural color composite image was created using the red, green, and blue wavelengths (ETM+ bands 3, 2, & 1).