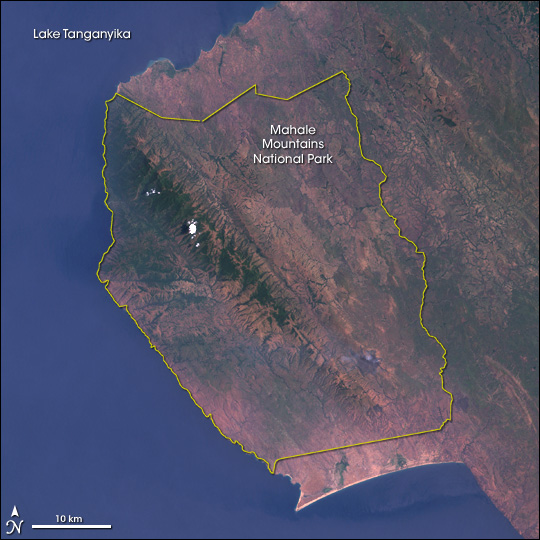 Mahale Mountains National Park lies on the shores of Lake Tanganyika in western Tanzania. The park has several unusual characteristics. First, it is one of only two protected areas for chimpanzees in the country. (The other is a nearby national park on the Gombe River made famous by the researcher Jane Goodall.) Another unusual feature of the park is that it is one of the very few in Africa that must be experienced by foot. There are no roads or other infrastructure within the park boundaries, and the only way in and out of the park is via boat on the lake.

This natural-color Landsat 7 image shows the entire extent of the 1,613-square-kilometer (623-square-mile) area of the park. The Mahale Mountains run through the heart of the park and are one of the most obvious features in this image. The tallest peaks reach as high as 2,460 meters (8,125 feet). With such a substantial range of altitude, the park has a similarly wide range of ecosystems. The tall ridgeline wrings moisture from the air, but substantially more rain falls on the western (lakeside) slopes, while the eastern slopes are in a “rain shadow.” The effect of the topography on precipitation is immediately apparent in the scene, as dense, green forests exist on the western side, while browner, more arid landscapes appear on the other.

Deep green lines running down from the Mahale peaks into Lake Tanganyika show the location of riverine forest. The puff of white is a cloud floating over the slopes of Mt. Slsaga. The purple-toned area near the southeastern end of the park is most likely a burn scar from an apparently still-smoking fire. Fire is a natural part of the park’s ecosystem, releasing nutrients and minerals back into the soil and making space for new grass shoots and other vegetation, which support the park’s wide variety of grazing mammals.

This Landsat 7 image was created from data collected by the Enhanced Thematic Mapper Plus (ETM+) on October 1, 2001. The natural-color image was created by combining red, green, and blue wavelengths (ETM+ bands 3, 2, & 1) from the ETM+ data.