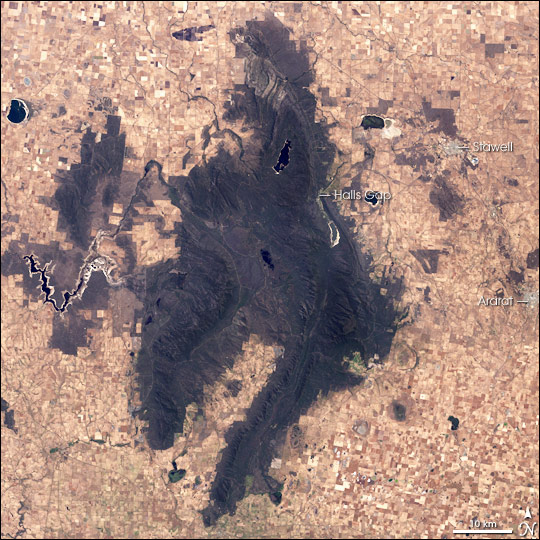 In Victoria, Australia, near the southeastern tip of the continent, sandstone mountains rise above the surrounding farmland. A 19th-century surveyor named the mountains after those in his native Scotland: Grampians. In 1984, the mountains were declared a national park. Covering 1,700 square kilometers (656 square miles), the park is home to a variety of plants and animals, many of which live nowhere else.

On December 15, 2000, the Landsat 7 satellite captured this image of Grampians National Park and its surroundings in Victoria, Australia. Marked by sharp ridges, the park’s sandstone mountains range in color from charcoal gray to reddish tan. Around the park is farmland—tiny rectangles of buff, beige, and brick red. Several bodies of water dot the region. The meandering water body west of the park is bordered by beige, indicative of low water levels. Along the eastern edge of the park is Halls Gap, generally used as a park entrance. East of the park is the town of Ararat.

December and January fall within the Australian summer, when extremely hot, dry conditions can spark fires. A little more than five years after Landsat took this picture, a fire burned nearly half the park. As its native plant species are well-adapted to fire, the vegetation appeared well on its way to recovery 12 months later, as reported on the park Web site. In early January 2007, a much smaller fire broke out near the park’s northern end, but was quickly contained. According to the Australian Broadcasting Corporation, residents near the park hoped for a complete ban on campfires throughout the summer to avoid another massive blaze like the January 2006 fire.