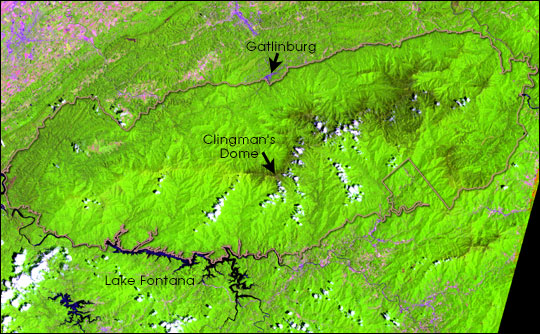 The Great Smoky Mountains National Park straddles the ridgeline of the Appalachian Mountains in the southern United States. The border between Tennesse to the west and North Carolina to the east runs vertically through the middle of the park. On its route from Maine to Georgia, the Appalachian Trail passes through the center of the park along the ridgeline pictured here. The park was first created in 1934, and it encompasses over 2,000 square kilometers (800 square miles), making it one of the largest protected areas in the eastern United States. Before the arrival of European settlers, the region was part of the homeland of the Cherokee Native Americans.

This Landsat scene shows the park, with its southern boundary along Lake Fontana. The central high ridgeline through the spine of the park is evident, with the light green forests of the lower lands and slopes giving way to the darker green regions of the ridges and peaks. The lower region forests are dominated by deciduous leafy trees (which strongly reflect near-infrared radiation, which is colored green in this image). At higher altitudes, deciduous forests give way to coniferous trees like Fraser Firs, which are less dramatically reflective at near-infrared wavelengths, and so appear darker in the scene.

The pink areas outside the park are cleared or fallow land, while grey areas are cities, towns, and roads. The rectilinear feature on the park boundary on the eastern side marks the boundary between the park and the Cherokee Indian Reservation. The flipped L-shape in the darker green region in the center of the park marks the peak of Clingman’s Dome. At 2,024 meters (6,643 feet), it is the highest point in the park and is one of the tallest peaks on the Appalachian Trail.

Altitudes in the park range from 250 to 2,000 meters (875 to 6,643 feet). The wide range of altitudes mimics the latitudinal changes found throughout the entire eastern U.S. Plants and animals common in the Northeast have found familiar ecological niches in the park’s higher altitudes, while southern species find homes in the balmier lower reaches. During the most recent ice age, the northeast-to-southwest orientation of the Appalachian mountains allowed species to migrate southward along the slopes rather than finding the mountains to be a barrier. As climate warms, many species are now migrating northward along the slopes.

The park has a very high humidity and rainfall, averaging from 140 centimeters (55 inches) per year in the valleys to 215 centimeters (85 inches) per year on the peaks. This is more annual rainfall than anywhere in the lower 48 states outside the Pacific Northwest. The park is almost 95 percent forested, of which roughly a quarter is old growth forest with many trees that predate European settlement of the area. It is one of the largest blocks of deciduous, temperate old growth forest in North America.

The variety of altitudes, the abundant rainfall, and the presence of old growth forests give the park an unusual richness of biota. About 10,000 species of plants and animals are known to live in the park, and estimates as high as an additional 90,000 undocumented species may also be present. The park was designated an International Biosphere Reserve in 1976, and was certified as a United Nations World Heritage Site in 1983.

This image was acquired by Landsat 7’s Enhanced Thematic Mapper plus (ETM+) sensor on June 8, 2000. This false-color composite image was created using the infrared, near-infrared, and red wavelengths (ETM+ bands 5, 4, & 3).