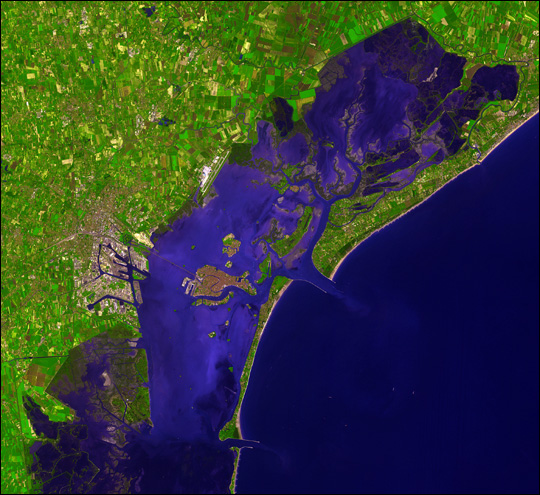 The city of canals, Venice stretches out across numerous small islands in a marshy lagoon along the Adriatic Sea in northeastern Italy. The saltwater lagoon stretches along the shoreline between the mouths of the Po (south) and Piave (north) Rivers. This image from the Advanced Spaceborne Thermal Emission and Reflection Radiometer on the Terra satellite shows the watery city in spectacular detail, using false-color image enhancements that bring out the details of water and vegetation.

The heart of Venice is on the island known as the Rialto, the largest island in the lagoon, which is just southwest of the center of this scene. The city is somewhat protected from the open sea by a row of sandbanks known as the Lido (east of Rialto), however, the city is continually under threat of flooding and erosion, and has been experimenting with tidal control measures for more than a thousand years. Four hundred bridges cross the labyrinth of canals that form the 120 islands of Venice. All traffic in the city moves by boat. Venice is connected to the mainland, 4 kilometers (2.5 miles) away, by ferries as well as a causeway for road and rail traffic.

Rialto is split by the Grand Canal, which follows the path of an ancient river. The Grand Canal winds through the city for about 3 kilometers (about 2 miles), dividing it into two nearly equal sections. According to tradition, Venice was founded in 452, when the inhabitants of Aquileia, Padua, and several other northern Italian cities took refuge on the islands of the lagoon from the Teutonic tribes invading Italy at that time.

This simulated natural color ASTER image covers an area of 39 x 35 km and was acquired on December 9, 2001.