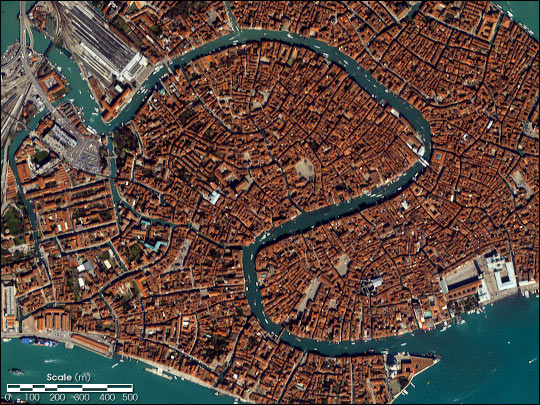 The Grand Canal curves in a great “S” through the heart of the red tile roofs of Venice, Italy, in this Ikonos image, acquired on April 2, 2001. The Canal is the main thorough-fare through the city, which is built on 118 tiny islands linked by canals and bridges. The city sits in the center of the Laguna Venetta, three kilometers from the Italian mainland and three kilometers from the Adriatic Sea. Boats, the primary form of transportation, can be seen as small white strips in the Grand Canal and the water around the island. In the large image, the causeway leading to the mainland stretches northwest from the island. The narrow length of land east of Venice, which is covered by the city of Lido, separates the Laguna from the Adriatic.

Founded in the fifth century, Venice is a UNESCO World Heritage site because of its architecture and art. Some of the city’s most famous sites are visible in this image. The large square on the right edge of the image where the Canal widens into the Laguna is St. Mark’s Square (Piazza San Marco). St. Mark’s Basilica sits on the far right side of the square. South of the Basilica, the Palazzo Ducale forms a stark, white “U.”

This image also emphasizes Venice’s fragility. Like the fabled city of Atlantis, the city is at risk of being submerged. Autumn and winter high tides flood city streets and raise water levels on the canals, making it difficult or impossible for boats to squeeze under the bridges. The high tides, called aqua alta, are also eroding the foundations of buildings, which are tightly packed along the edge of the canals and the city’s outer shores.