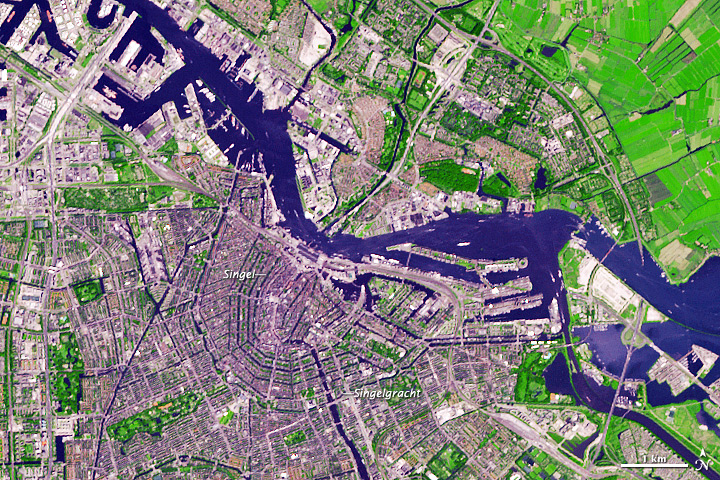 A network of canals encircles the medieval city center of Amsterdam. Planned at the end of the sixteenth century and built during the seventeenth, the city is a “masterpiece of hydraulic engineering,” according to the United Nations Educational, Scientific, and Cultural Organization (UNESCO). By draining swampland and digging canals, Amsterdam’s designers created a port city that inspired planners in England, Sweden, and especially Russia—where Peter the Great hired Dutch engineers to transform swampy terrain into St. Petersburg.

The Advanced Spaceborne Thermal Emission and Reflection Radiometer (ASTER) on NASA’s Terra satellite acquired this image of Amsterdam on July 24, 2012. ASTER combines infrared, red, and green wavelengths of light to make false-color images. In this image, urbanized areas appear in shades of gray; vegetation is red; and water is blue. The concentric canals appear as blue semicircles spreading out from the historic city center.

Centuries before it took on its present configuration, Amsterdam was a small fishing village on the banks of the Amstel River. People living in the region constructed an earthen dam to hold back the sea; when a bridge over the Amstel was connected to the dam, there was soon a route for overland traffic. Deriving its name from “Amstel” and “dam,” Amsterdam was declared a city in 1306.

Trade brought prosperity, and by the end of the sixteenth century, Amsterdam was growing past its medieval defenses. City planners undertook an ambitious project of swamp draining and canal digging to extend the city. Once roughly confined to the area within the Singel, the city was expanded outwards to the Singelgracht. After the concentric canals were dug, smaller canals were added and stretched straight out from the city center. The new, straight canals created dozens of islands, now linked by hundreds of bridges. Today, residents and tourists alike can easily navigate the city on its municipal canal-bus system.