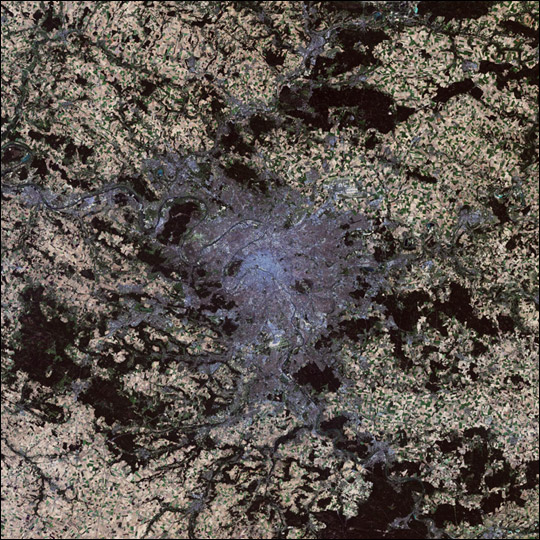 With its broad, tree-lined avenues, grand monuments, quaint bistros, and sublime architecture, Paris is arguably the most beautiful city in the world. Known as the City of Light, Paris is located in northern France, roughly 100 miles (160 kilometers) southeast of the English Channel. The city itself houses roughly 2 million people and the larger metropolitan area contains more than 11 million people.

The city existed as a Gallic fishing village prior to 52 BC, when Julius Caesar conquered the site and made the town part of the Roman Empire. Since then Paris has been the seat of power for several great Emperors and Kings, including Charlemagne and Napoleon. The city was a major seat of learning in the Middle Ages, the home of the Enlightenment, and the birthplace of modern art. Over the centuries, it has been besieged twice by the Germans and twice by the English and has been the staging grounds for many bloody revolutions.

In the above image, one can see the Seine River wending its way through the center of the image. The gray and purple pixels are the urban areas. The heart of the city appears grayer than the surrounding suburbs. The patchwork of green, brown, tan and yellow surrounding the city is farmland.

This false-color image of Paris was made using data collected on August 24, 2000, by the Enhanced Thematic Mapper plus (ETM+) onboard the Landsat 7 satellite. (The corresponding archive data for this scene may be found at Path 199, Row 26 on this date.)