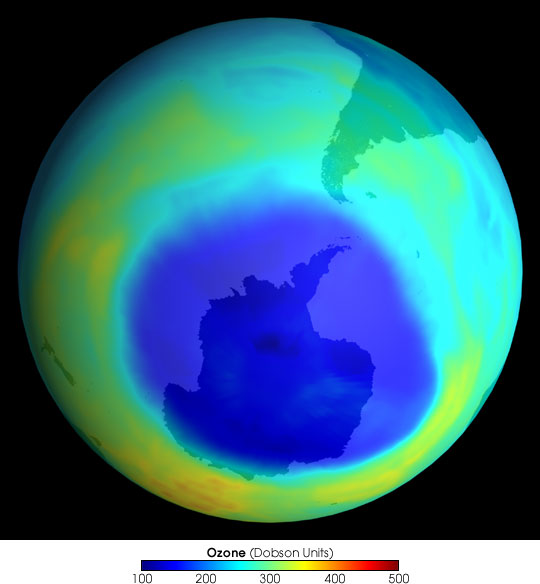 This year’s Antarctic ozone hole is the second largest ever observed, according to scientists from NASA, the National Oceanic and Atmospheric Administration (NOAA), and the Naval Research Laboratory (NRL). The Antarctic ozone “hole” is defined as thinning of the ozone layer over the continent to levels significantly below pre-1979 levels. Ozone blocks harmful ultraviolet “B” rays. Loss of stratospheric ozone has been linked to skin cancer in humans and other adverse biological effects on plants and animals.

NASA scientist Paul Newman said, “While chlorine and bromine chemicals cause the ozone hole, extremely cold temperatures, especially near the edge of Antarctica, are also key factors in ozone loss.” Given the leveling or slowly declining atmospheric abundance of ozone-destroying gases, the year-to-year changes in the size and depth of the ozone hole are dominated by the year-to-year variations in temperature in this part of the atmosphere. The fact that this year’s ozone loss is much greater than last year’s reflects the very different meteorological conditions between these two years.

The image above was created with data from NASA’s Earth Probe Total Ozone Mapping Spectrometer (TOMS). Blue represents the lowest ozone levels, while orang and red represent the highest.