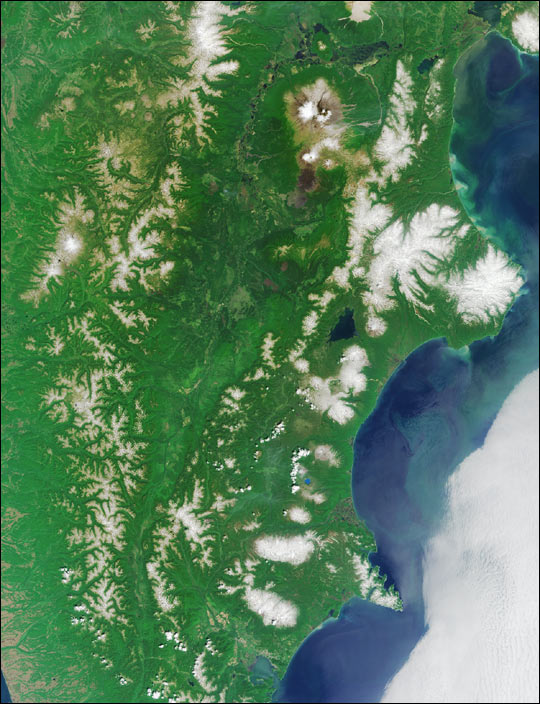 Here’s another chance to play geographical detective! This natural-color image was acquired by the Multi-angle Imaging SpectroRadiometer (MISR) in July 2003, and represents an area of about 355 kilometers x 463 kilometers. Most of the landmass pictured in this image falls within a named geographic region. This region is defined by its political boundaries within a larger country, and may be a state, a province, a department, or similar entity. These 6 questions refer to this geographic region. You may use any reference materials you like to answer them.

2. Which is closer to the image area?
nbsp;   (A) The nearest point along the path of annularity of the first solar eclipse of 2003.
nbsp;   (B) The location where a cargo ship spilled tens of thousands of bathtub toys during rough seas in the early 1990s.

4. Which occurred earlier?
nbsp;   (A) Completion of a monument commemorating the seafarer who founded what is now the regional capital city.
nbsp;   (B) The attack on the port of the city and defense of the port by a 44-gun frigate.

5. Which is smaller?
nbsp;   (A) The number of masts of the ship upon which the aforementioned seafarer sailed during the last voyage of his or her lifetime.
nbsp;   (B) The number of animals first identified and named after the naturalist who sailed with the seafarer.

6. Within the region, which is further north?
nbsp;   (A) The main military base.
nbsp;   (B) The most important lake-environment spawning ground for anadromous fish.

E-mail your answers, name (initials are acceptable if you prefer), and your hometown by Tuesday, October 7 to suggestions@mail-misr.jpl.nasa.gov. Answers will be published on the MISR web site. The names and home towns of respondents who answer all questions correctly by the deadline will also be published in the order responses were received. The first 3 people on this list who are not affiliated with NASA, JPL, or MISR and who have not previously won a prize will be sent a print of the image.

A new "Where on Earth...?" mystery appears approximately once every two months. New featured images are released on Wednesdays at noon Pacific time on the MISR home page, http://www-misr.jpl.nasa.gov and on the Atmospheric Sciences Data Center home page, http://eosweb.larc.nasa.gov/, though usually with a several-hour delay.