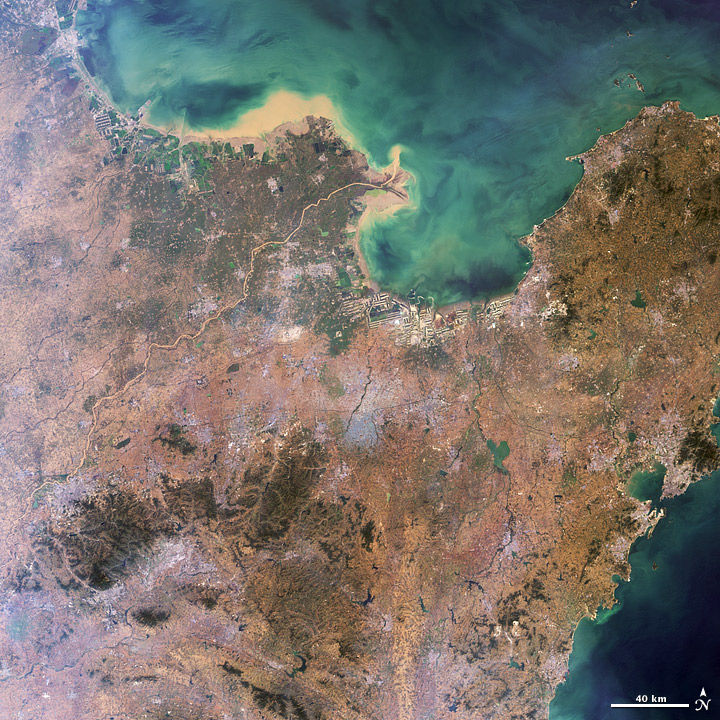 Where on Earth...? Follow the clues to figure out what geographic region is shown in this image, and then answer the questions about the place for a chance to win the MISR Mystery Image contest. Submit your answers in the answer form no later than midnight, Pacific Daylight Time on November 3, 2010.

This image was acquired by the Multi-angle Imaging Spectroradiometer (MISR) on NASA’s Terra satellite. Most of the landmass falls within a named geographic region. This region is defined by its political boundaries within a larger country, and may be a state, a province, a department, or similar entity. These questions refer to this geographic region. You may use any reference materials you like to answer them.

From the statements below, please indicate which ones are True or False:

Email your answers, name (initials are acceptable if you prefer), and your hometown by the quiz deadline of midnight, Pacific Daylight Time, November 3, 2010, to the quiz answer form.

Answers will be published on the MISR web site. The names and hometowns of respondents who answer all questions correctly by the deadline will also be published in the order responses were received. The first 3 people on this list who are not affiliated with NASA, JPL, or MISR and who have not previously won a prize will be sent a print of the image.

A new “Where on Earth...?” mystery will appear on the MISR quiz section periodically. MISR was built and managed by NASA’s Jet Propulsion Laboratory, Pasadena, CA for NASA and flies on the Terra satellite. The Terra satellite is managed by NASA’s Goddard Space Flight Center, Greenbelt, MD. JPL is a division of the California Institute of Technology.