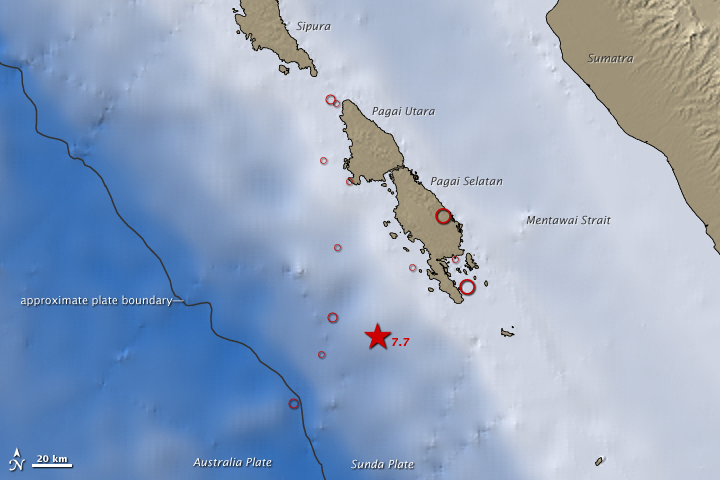 At 9:42 p.m. local time (14:42 UTC) on October 25, 2010, a 7.7-magnitude earthquake occurred off the coast of Indonesia. The quake struck 20.6 kilometers (12.8 miles) below the floor of the ocean, spawning a 3-meter (10-foot) tsunami on Pagai Island. Pagai is accessible only by boat, and rough seas prevented rescue workers from reaching the island immediately after the disaster. Within roughly 24 hours of the quake, however, news reports told of more than 100 casualties and as many as 500 people missing.

This image shows the region where the earthquake and numerous aftershocks occurred on October 25 and 26, 2010. Bathymetry appears in shades of blue, and topography appears in shades of brown. Thin black lines delineate coastlines, and a thick black line marks the fault line in this region. The epicenter of the 7.7-magnitude earthquake appears as a red star. Aftershocks appear as red circles, with bigger circles indicating stronger aftershocks.

West of Sumatra, a string of islands runs southeast-northwest. Nearest the epicenter, Pagai is divided into two parts: Pagai Utara in the northwest, and Pagai Selatan in the southeast. Tiny islands fringe Pagai Selatan’s western side. Pagai and its tiny neighbors evidently bore the brunt of the high water.

The U.S. Geological Survey (USGS) reported that the October 25 quake resulted from thrust faulting along the subduction zone where the Australia Plate slides below the Sunda Plate. Relative to the Sunda Plate, the Australia Plate moves toward the north-northeast at roughly 57–69 millimeters per year. The USGS described the October 25 event as the latest in a series of ruptures. The quake occurred roughly 800 kilometers (500 miles) south of the 9.1-magnitude earthquake that struck December 26, 2004. Tsunamis from that earthquake killed more than a quarter million people.

Located along the Pacific Ring of Fire, Indonesia experiences considerable seismic activity, in both earthquakes and volcanoes. On October 26, 2010, the Australian Government’s Darwin Volcanic Ash Advisory Centre reported that Mount Merapi on the Indonesian island of Java (southeast of Sumatra) erupted, releasing plumes of volcanic ash.

NASA Earth Observatory image by Jesse Allen, based on data from the General Bathymetric Chart of the Oceans, the Shuttle Radar Topography Mission, the USGS Earthquake Hazard Program, and the Sumatran Plate Boundary Project. Caption by Michon Scott.