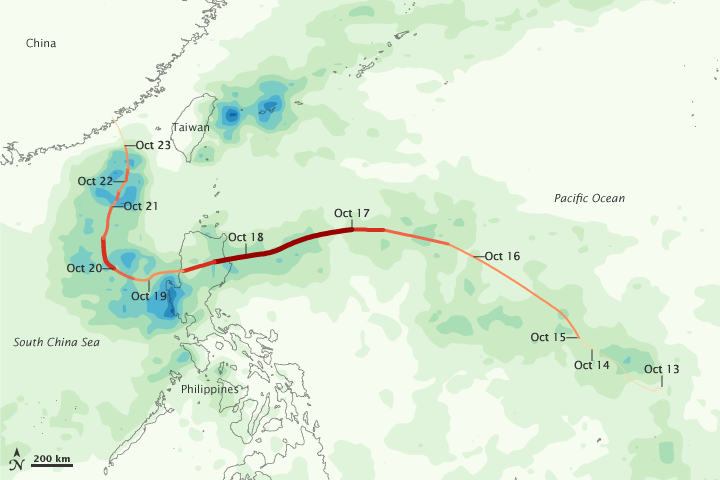 Though a storm’s strength is gauged by wind speed, tropical cyclones also pose a hazard because of the intense rain they bring to a region. This image shows the heavy rain Super-typhoon Megi unleashed as it tracked west across the Pacific between October 13 and October 23, 2010. The heaviest rainfall—more than 600 millimeters or nearly 24 inches—appears in dark blue. The lightest rainfall—less than 75 millimeters or 3 inches—appears in light green.

The storm’s track is superimposed on the rainfall map. Megi formed as a tropical depression over the western Pacific Ocean on October 13, 2010. It quickly strengthened to a named storm, and three days after forming, had grown to a super typhoon. In general, rainfall roughly matches the storm track, especially west and northwest of the Philippines.

Over the South China Sea, Megi re-strengthened somewhat before making landfall along the Chinese coast. The storm dropped heavy precipitation along a curving path between the Philippines and China.

Away from the storm track, areas of heavy rainfall appear east of Taiwan, where torrential rains led to deadly landslides. The Associated Press reported that, as of October 24, floods and landslides had killed as many as 31 people in that island nation. United Daily News reported that the heavy rains in Taiwan might have resulted from interactions between Megi and monsoon weather patterns northeast of the storm.