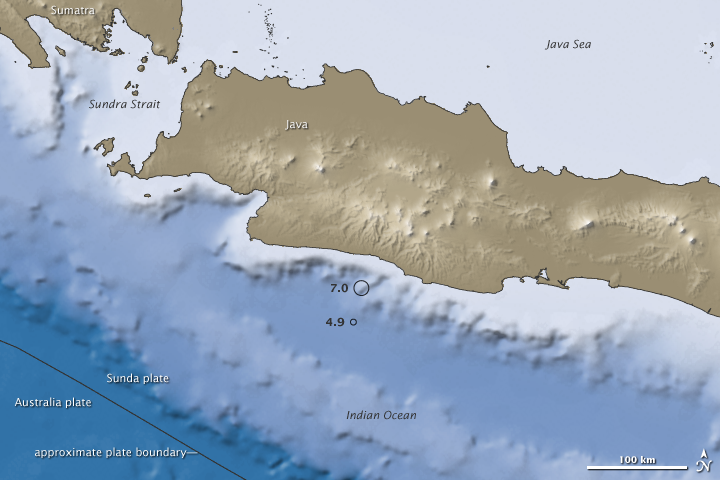 At 2:55 p.m. local time (7:55 UTC) on September 2, 2009, a 7.0-magnitude earthquake struck off the southern shore of western Java (Jawa). The quake occurred at a depth of nearly 50 kilometers (31 miles), approximately 190 kilometers (120 miles) south-southeast of the capital city, Jakarta. This image shows the region’s bathymetry in shades of blue and topography in shades of brown. Black circles mark quake locations.

The earthquake triggered landslides in Cianjur District south of Jakarta. On September 3, Agence France-Presse (AFP) reported that at least 57 people had been killed and dozens more were trapped under rubble. Police, rescue workers, and local residents used garden hoes and bare hands trying to reach those who had been trapped. Meanwhile, a Javanese disaster agency official said that roughly 18,000 buildings in Indonesia had been damaged. Throughout Java, some 5,000 residents had been displaced.

The USGS reported that, where the quake occurred, the Australia plate travels toward the north-northeast, and subducts into Earth’s mantle below the Sunda plate. The seismic waves from this quake, however, indicated that the subduction process didn’t lead to the quake. Instead, the earthquake likely resulted from a reverse fault within the Australia plate.

A 7.0-magnitude earthquake struck off the southwestern coast of Java on September 2, 2009. The quake triggered landslides south of the capital city, Jakarta.