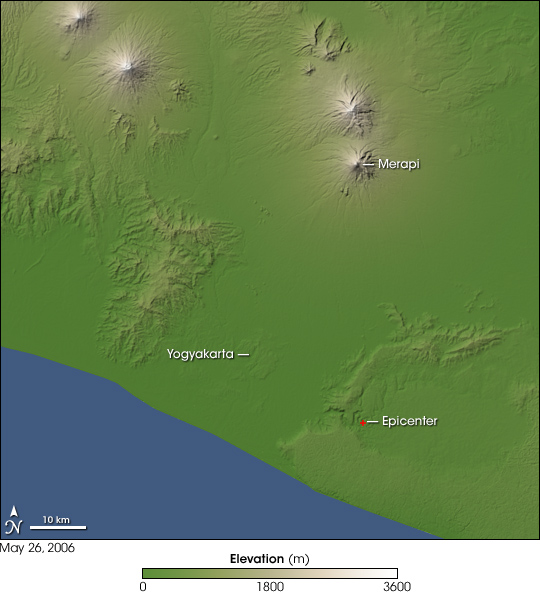 A powerful earthquake rattled Yogyakarta, Java, Indonesia, in the early morning hours of May 27, 2006. The quake destroyed more than 60,000 houses in the city, and killed an estimated 6,234 people, reported the World Health Organization on June 6. Though Indonesia experiences frequent earthquakes, the May 27 quake was unusual in that it was centered about 10 kilometers under the Earth’s surface, according to the United States Geological Survey (USGS). Most earthquakes in Indonesia occur deep under the Earth’s surface where the slab of the Earth’s crust that carries Australia (the Australia Plate) sinks beneath the Sunda Plate on which the islands of Indonesia ride. Earthquakes occur in the sometimes-messy grind of colliding plates, but these are centered deep below the Earth’s surface. The May 27 earthquake happened near the surface along a fault in the Sunda Plate, about 20 kilometers south-southeast of Yogyakarta.

This image shows the topography of the landscape near the earthquake epicenter. Yogyakarta sits in a broad valley between two groups of roughly north-running mountains. The towering Merapi Volcano caps the northeast end of the valley. Behind it is the single peak of the Sundoro Volcano and a cluster of small peaks in the Dieng Volcano Complex. The Slamet and Cereme Volcanoes are west of Merapi in the upper-left corner of the image. The earthquake occurred along a fault east of the mountains that frame Yogyakarta to the east. The image was created from data collected by the Shuttle Radar Topography Mission.

The earthquake is not the only geologic activity to threaten the region: the Merapi volcano was also rumbling at the end of May. The volcano sent clouds of hot gas and lava down its slopes on June 6, prompting the evacuation of 11,000 people, said news reports. The ASTER sensor on NASA’s Terra satellite captured an image of the volcano in action on June 6. The volcano had been showing signs of increased activity since April, but activity picked up after the May 27 earthquake. While volcanic activity and earthquakes are often connected, it is not clear if the May 27 earthquake is directly linked to Merapi’s activity, said the USGS. The same underlying geologic processes may have triggered both events.