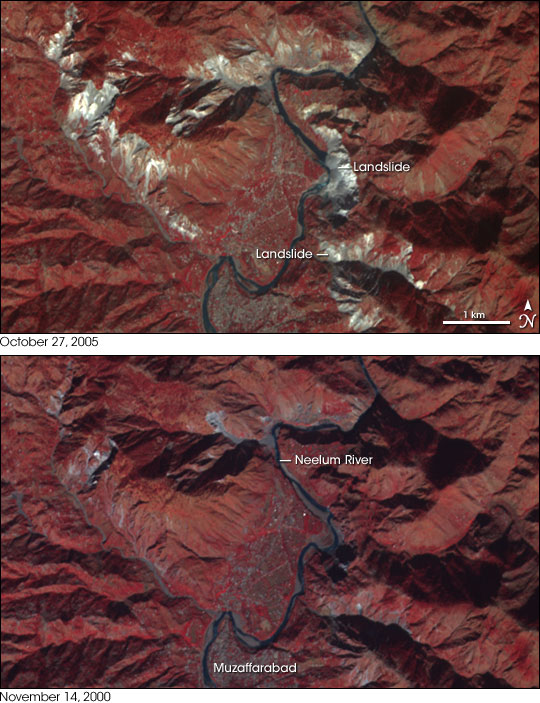 The steep mountains of northern Pakistan came tumbling down when a powerful 7.6-magnitude earthquake rocked the region on October 8, 2005. The earthquake isolated already hard-to-access villages and cities in both Pakistani and Indian Kashmir when roads crumbled or were covered with landslides. Fifty-seven thousand people had died in Pakistan as of November 1, a number that could grow as winter settles over the Himalayas, stranding survivors without food or shelter.

The city nearest the epicenter of the earthquake, where shaking was strongest, was Muzaffarabad, Pakistan. The top image, taken by the Advanced Spaceborne Thermal Emission and Reflection Radiometer (ASTER) on October 27, 2005, shows stunning devastation in the mountains around Muzaffarabad. White streaks—fresh landslides—cover many of the steep hills around the city. In some cases, wide sections of the mountain, more than a kilometer in width, have slid into the valley below.

Comparing the October 27 image to another taken on November 14, 2000, reveals how widespread the landslides are. In both images, vegetated land is red, water is blue, the city is dark grey, and exposed earth and rock are tan and white. In 2000, the mountains were entirely covered in vegetation, with only a few sections of grey-white rock defining mountain ridges. In 2005, nearly all of the mountains that flank the city have collapsed in several places. The landslide area extends far beyond the region shown here: the mountains are marked by landslides in a line that extends northwest from Muzaffarabad in the large image. A more detailed view of the top labeled landslide is available from the Ikonos satellite.

The magnitude 7.6 earthquake that shattered Pakistan on October 8, 2005, caused the most damage in the region surrounding the city of Muzaffarabad, about 10 kilometers southwest of the earthquake’s epicenter. The Ikonos satellite captured an image of a landslide in Makhri, a village on the northern outskirts of Muzzaffarabad, on October 9, 2005. The western face of the mountain has collapsed, sending a cascade of white-grey rock into the Neelum River. The landslide is likely only one of many to occur along the river, which is almost unrecognizable after the earthquake.