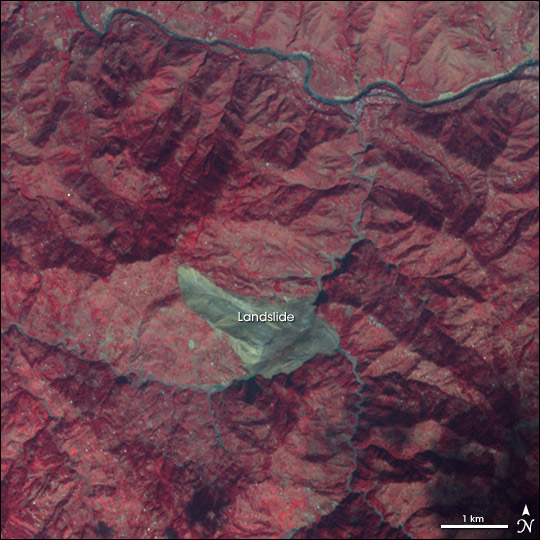 The massive earthquake that shattered Pakistan on October 8, 2005, was centered in the steep mountains of Kashmir. Communities already hard to reach because of the treacherous mountain topography were cut off entirely when landslides slumped over roads. The Advanced Spaceborne Thermal Emission and Reflection Radiometer (ASTER) on NASA’s Terra satellite captured this image of one such landslide on October 11, 2005. A large wedge of tan soil stretches more than 2 kilometers in length and over 1 kilometer in width along the side of the mountain in the center of the image. All vegetation, red in this image, is gone in the landslide region. A number of smaller landslides are also visible, mostly along the main river and other valleys.

The large landslide is southeast of the earthquake’s epicenter between Muzaffarabad, Pakistan, and Uri, India, in the Pir Punjal range of Kashmir. Not only is the landslide itself a hazard, but it covers the convergence between two small rivers, which may trigger future floods as the water finds new paths around the earthen dam. Before the landslide, the rivers flowed together near the center of the scene, and then flowed north into the large river at the top of the image. Three days after the earthquake (and presumably, the landslide) occurred, small aquamarine pools of water were forming along the edge of the rubble.