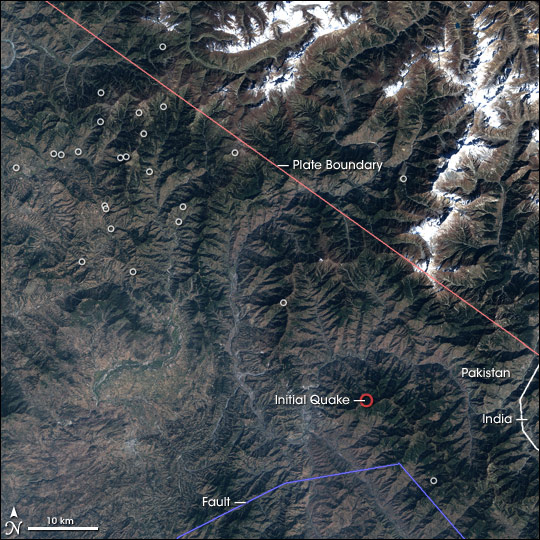 At 8:50 a.m. on October 8, 2005, a powerful earthquake rattled northern Pakistan, India, and Afghanistan. Centered in northern Pakistan, the 7.6 quake flattened nearby cities, causing an estimated 41,000 deaths and leaving millions homeless, according to news reports. The massive quake was followed by dozens of strong aftershocks, most of which were larger than 5.0 on the Richter scale.

The geologic forces that triggered the powerful quakes also shaped the rugged, mountainous region shown in this Landsat image. Geology in northern Pakistan and India is controlled by the motion of the Indian subcontinent as it is shoved under the Asian continent at a rate of about 40 millimeters (1.6 inches) per year. As the continents collide, they push up the highest mountain ranges on the planet: the Himalaya, the Hindu Kush, the Karakoram, and the Pamir. The friction also breaks the Earth’s solid surface into an intricate series of faults. Like the spidery veins that radiate from a crack in glass, the faults are connected, but are sometimes hard to trace. As the piece of the Earth’s crust on which India sits moves, tension builds in the faults. Eventually, the faults slip, releasing their tension and giving vent to an earthquake. As the tension is redistributed, the ground shakes along adjoining faults or along other sections of the same fault in a series of aftershocks.

In this image, the boundary between the Indian plate and the Asian plate is traced in red. The boundary is not a neat line, as the image depicts, but rather a broad region where the two continents meet. The boundary is equally well-defined by the location of the earthquake, red circle, and its aftershocks, white circles, which are clustered along the edge of the plate. To the south of the earthquake is a large local fault system. Landsat took the image on October 7, 2001.