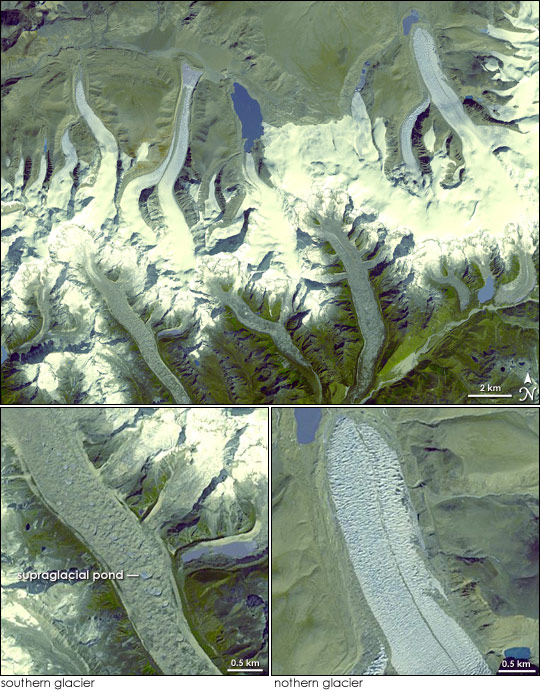 One of the highest mountain reliefs on Earth can be found in the tiny country of Bhutan. Sandwiched between eastern India and the Tibetan plateau, Bhutan hosts peaks that reach between 5,000 and 7,000 meters (16,000-23,000 feet) in height. These mountains are neighbors to Mount Everest, Earth’s highest peak at 8,850 meters (29,035 feet). The impressive Bhutan Himalayas are permanently capped with snow, which extends down valleys in long glacier tongues. Because of weather patterns on each side of the Himalaya and differences in topography, the glaciers on each side of the mountain are distinctly different from one another and are likely to react very differently to climate change.

This image, taken by the Advanced Spaceborne Thermal Emission and Reflection Radiometer (ASTER) on November 20, 2001, is one of a series of images used to study the glaciers of the Bhutan Himalayas. By tracking the movement of surface features like crevasses and debris patterns, Andreas Kaab of the University of Zurich measures the speed at which glaciers flow down the mountain. He found that glaciers on the north side of the range move as much as ten times faster than glaciers on the south side.

Glaciers move under their own weight. As more and more snow piles on the glacier, the ice compresses, deforms, and eventually begins to slide. One of the reasons the glaciers on the south side of the Bhutan Himalaya are moving so slowly—10-20 meters per year compared to 100-200 meters per year on the north— may be that their supply of ice is dwindling. Without new weight pressing on the glaciers, they are stagnating.

One reason the southern glaciers may be losing weight is the rock and gravel that rests on top of them. As this image clearly shows, the northern glaciers form in plateaus as high as 7,000 meters in elevation. The glaciers slide from the plateaus down the steep mountain side in long glacier tongues, which are white, tinted blue-gray where the snow is very compressed. The mountains are no less steep on the south side, but the glaciers have no plateaus on which to form. Instead, the glaciers cling to steep rock walls, which shower the glaciers with debris. The glaciers on the south are tinted gray-brown in this image because of the debris. Because the dark-colored debris absorbs energy from the Sun, the surface of the glacier is more susceptible to melting than it would be if its surface remained a reflective white. Indeed, the close view of a southern glacier, shown in the lower left image, shows pale blue ponds of liquid water, “supraglacial ponds” on the glacier’s surface. The northern glacier, lower right, is free of both debris and ponds.

The difference between the glaciers on each side of the mountain could become more pronounced as global warming sets in. Eighty to ninety percent of new snow falls on the southern glaciers between March and October during the summer monsoon. As temperatures warm, not only will more snow melt, but precipitation will tend to fall as rain instead of snow. Without fresh snow to maintain their mass and movement, the glaciers will shrink in place, a process called “down wasting.” By contrast, the northern glaciers are fed mostly by winter snow. Because temperatures are already cooler in the winter, the northern glaciers are more likely to get fresh snow every year, making them less sensitive to climate change. As temperatures warm, the fast-moving northern glaciers are most likely to adjust by retreating—shortening the length of the tongues that extend down into the valleys.

Understanding how glaciers may evolve is important because mountain glaciers are the proverbial “canary in the coal mine” when it comes to tracking global warming. Along with polar ice, they are the things most sensitive to warming temperatures. On top of being harbingers for climate change, melting glaciers can cause catastrophic floods, making it essential to monitor them regularly. Since most glaciers are remote and hard to get to, remote sensing is crucial to ongoing monitoring.