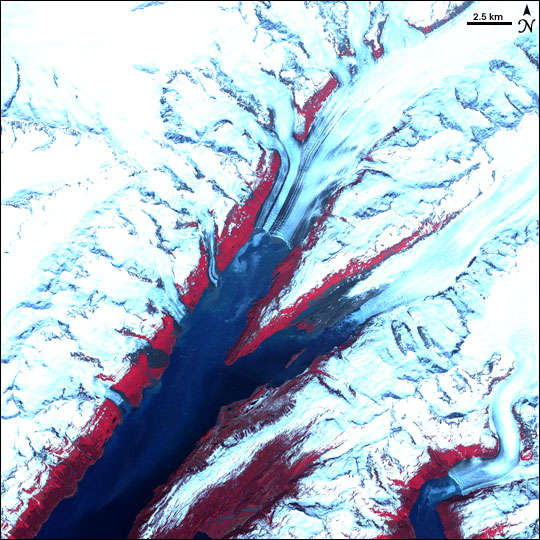 In the northwestern part of Alaska’s Prince William Sound, College Fjord cuts 40 kilometers into the heart of the rugged Chugach Mountains. The fjord contains five tidewater glaciers (glaciers that terminate in water), five large valley glaciers, and dozens of smaller glaciers. Members of the Harriman Expedition, which explored the region in 1899, named the glaciers in the fjord after some of the country’s oldest Eastern universities.

The two largest tidewater glaciers in the fjord are the Harvard (top center) and Yale (to the southeast) Glaciers, which are pictured in this infrared-enhanced image collected by the Advanced Spaceborne Thermal Emission and Reflection Radiometer (ASTER) on June 24, 2000. Snow appears white, glaciers appear bright blue, and land surfaces with vegetation on them appear red. Although the two-dimensional image makes it appear that the glaciers along the western side of the fjord simply fill in great ravines, in reality, the glaciers tumble down toward the water over steep hillsides like frozen waterfalls.

Unlike mountain glaciers, climate change is not the major influence on the advance or retreat of tidewater glaciers. Factors such as fjord depth, buoyancy, ice thickness, and iceberg calving rates influence the position of the glacier’s terminus more strongly than climate does. For example, although both the Harvard and Yale Glaciers originate from the same snowfield, the Harvard Glacier has advanced over the last century, while the Yale Glacier has retreated.