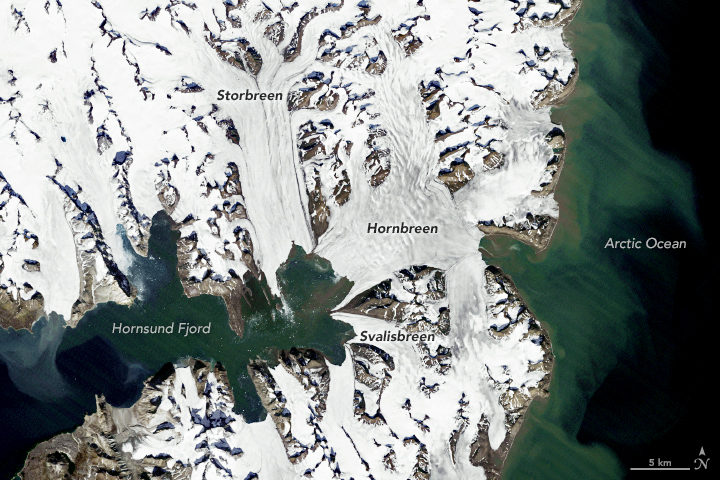 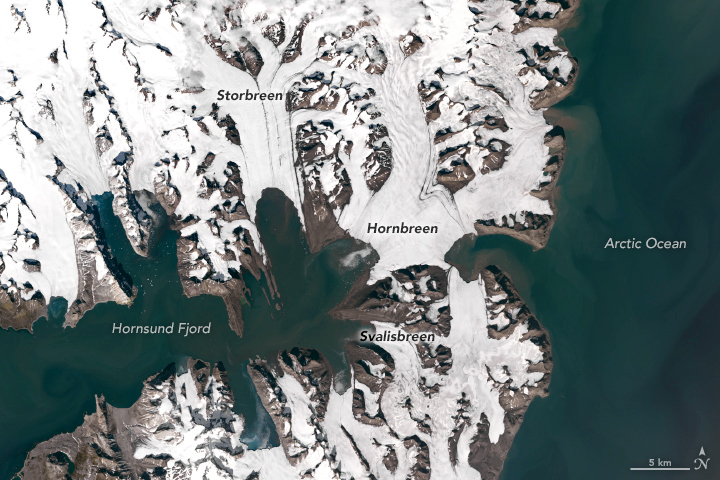 Mauri Pelto, an environmental scientist at Nichols College, has a go-to analogy for describing what a glacier needs to survive. “People need to consume the same number of calories as they expend to stay alive,” he said. Similarly, glaciers needs to accumulate at least as much snow and ice as they lose. “For glaciers, they need more than 50 percent of their area in the accumulation zone, which is the upper part of a glacier where snow persists year round.”

The mass a mountain glacier loses to evaporation, melting, or iceberg calving in the ablation zone cannot surpass the mass it adds near the top. Any imbalance causes glaciers to shrink over time, growing thinner, covering less area, and seeing their lowest edge (terminus) draw back toward the accumulation zone—a process scientists describe as retreat.

While other satellite sensors are needed to measure the thickness of glaciers, the natural- and infrared light imagers on the Landsat satellites excel at monitoring changes in glacial extent, snow lines and the positions of termini. Pelto has analyzed several decades of Landsat imagery for glaciers around the world and describes many of them on his blog From a Glacier’s Perspective.

One area Pelto has focused on is the Hornsund Fjord region in Svalbard, a remote Norwegian archipelago in the Arctic Ocean. The shallow fjord nearly divides the large island of Spitsbergen into two separate islands. Fourteen tidewater glaciers flow into the fjord, and all of them have retreated substantially during the past three decades. The Thematic Mapper (TM) on Landsat 5 captured a image (top) of Hornsund Fjord on August 20, 1990. The second image shows the same area on August 19, 2017, as observed by the Operational Land Imager (OLI) on Landsat 8.

Many of the glaciers have seen their termini retreat by several kilometers. One of the largest and fastest changing was Storbreen. “In Storbreen’s case, in 1990, 2013, and 2015, the snow line left only 20 percent of the glacier in the accumulation zone,“ explained Pelto. “This cannot sustain the other 80 percent. Storbreen will continue to lose mass until this equation balances or the glacier is lost.”

Since the water where Storbreen terminates is quite shallow, Pelto is confident that the glacier is retreating because rising air temperatures are driving the snow line higher up the glacier. In 1990, the snow line sat at an elevation of 400 meters. In 2013, 2014 and 2015, it has averaged about 500 meters. The center of Storbreen’s terminus has retreated nearly 6 kilometers (4 miles). 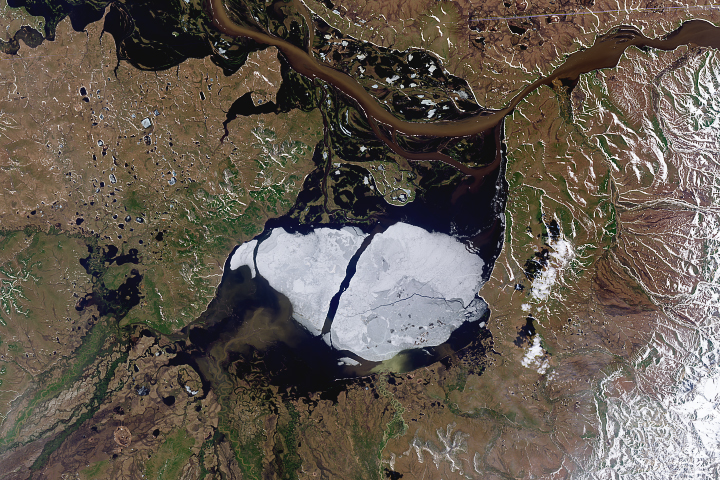