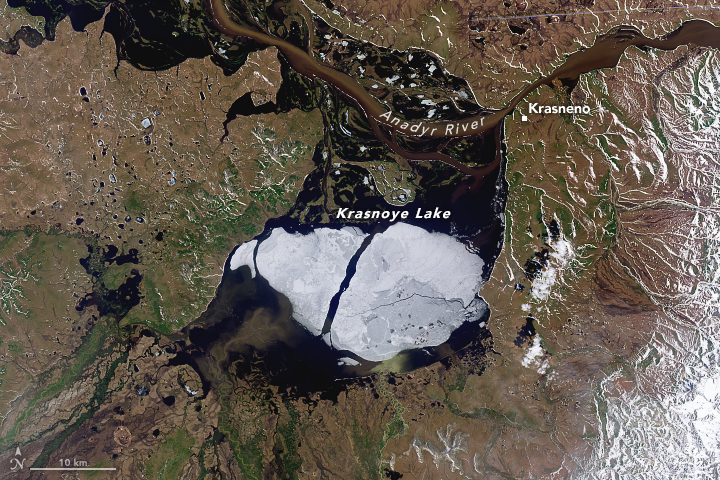 Krasnoye Lake, located along the lower course of the Anadyr River in northeastern Siberia, has long attracted the attention of geologists, geographers, and archaeologists. The main draw is the small, rounded pebbles of obsidian (volcanic glass) found along the beaches on the lake’s eastern shore.

People have long used obsidian for making stone tools, including spears and knives. The hard, dense stone is ideal for tool-making because it fractures in a way that forms extremely sharp edges. (Obsidian scalpels continue to be used occasionally by modern-day surgeons.)

Archaeologists and geologists have traced the origin of obsidian tools found at dozens of sites in northeastern Siberia to the beaches of Krasnoye Lake. Several archaeological sites are located along the lakeshore, just south of the town of Krasneno. Tools made from the lake’s obsidian have also been found in Alaska, more than 1,000 kilometers (600 miles) away. Ages of the sites range from the Neolithic (6,000 to 1,500 years before present) to modern times (within the last 500 years).

Conducting field work in remote, northerly locations like this is challenging because of the short summers. For most of the year, snow blankets the region and thick ice covers the lake and river. June, July, August, and September offer a short reprieve before snow and ice return, generally in October.

The Operational Land Imager (OLI) on Landsat 8 acquired this image (top) of the lake on June 16, 2018, just as the ice cover was breaking up. Sediment flowing into the lake from swampy terrain along the northern and southern shores stained parts of the lake brown.

The animation above shows this seasonal, late-spring change in action. Composed from images acquired between June 1 and June 21 by the Moderate Resolution Imaging Spectroradiometer (MODIS) sensor, it shows green vegetation and open water replacing the snow and ice.

Expeditions to Krasnoye Lake have helped researchers piece together the obsidian’s geological backstory. During a period of active volcanism tens of millions of years ago, magma in an underground conduit squeezed into a fault system near the surface of what is now the eastern shore of the lake. As the magma emerged and mixed with cool water, it rapidly chilled and formed the volcanic glass. Wave action and erosion rounded the rocks into small stones and deposited them on the lake shore.

Volcanic glass found on the beaches of this lake in northeastern Siberia left a mark on the archaeological record.