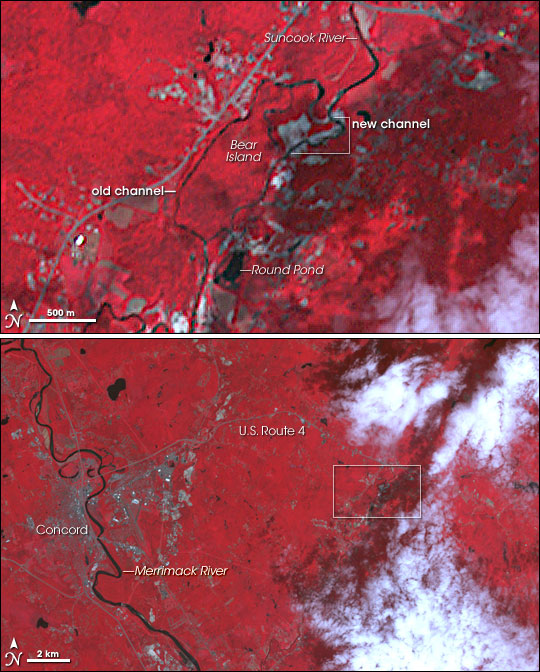 In mid-May 2006, the U.S. Northeast experienced days of heavy rain. Several states declared a state of emergency as floods strained dams and forced people to evacuate. Near the New Hampshire town of Epsom, the flooding Suncook River abandoned its meandering course around Bear Island and carved a more direct course southwest, the most dramatic change in a New Hampshire river course in recorded history.

This image of the old and new channels was captured by the Advanced Spaceborne Thermal Emission and Reflection Radiometer (ASTER) sensor on NASA’s Terra satellite. The bottom image shows a regional perspective, including the city of Concord. A white box outlines the Suncook River close-up view (top). Because narrow rivers can be hard to distinguish from dense vegetation in photo-like satellite images, this image uses ASTER’s observations of shortwave and near-infrared light to make water (blue) and bare ground (gray) stand out from vegetation (red).

Before the floods, the Suncook River flowed southward around Bear Island in two streams that joined up again to the west of Round Pond. During the flood, the river rushed past the old bend in the river and plowed its way more directly southwest, abandoning the riverbeds around the west and northeast sides of Bear Island. On either side of the river at the point where the new channel starts, charcoal-colored patches show where the land was scoured.

The state is studying the event and trying to determine what the impacts will be on fish and other river life, as the stretch of river was a popular angling spot. In addition, owners of former riverside restaurants, campgrounds, and other tourist spots hope the state will try to divert the river back into its former bed. Geologists and engineers are studying the change and trying to determine what, if anything, should be done about the river’s new path.