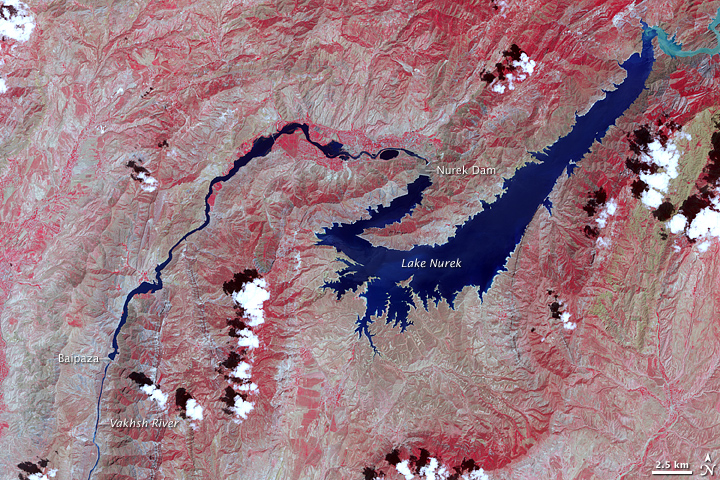 The Vakhsh River in Tajikistan embodies several superlatives: it is the largest river in the country, the most important source of electricity, and it is home to world’s tallest (completed) engineered dam, the Nurek. The river flows southwest from the glacier-capped mountains of Kyrgyzstan and crosses the entire length of central Tajikistan.

This false-color image shows the central part of the river, including the Nurek Dam and resulting reservoir. The image uses visible and near-infrared light to make the area’s sparse vegetation stand out from the surrounding terrain. Vegetation is red, bare ground is tan, and water is blue. Upstream of Lake Nurek, at a sharp bend in the river, the waters are pale blue; the brightness comes from sediment. The image was captured by the Advanced Spaceborne Thermal Emission and Reflection Radiometer (ASTER) on NASA’s Terra satellite on July 9, 2007.

The Nurek is one of five operational hydroelectric dams on the Vakhsh River; four more are in the planning or construction phases. The existing dams are responsible for about 90 percent of the country’s electricity, but at times, they have been insufficient to keep up with demand. Periodically, electricity has been rationed. Currently, the Nurek Dam generates the most electricity (3,000 megawatts), but the Rogun Dam, which is under construction upstream, will eventually exceed it by producing 3,600 megawatts.

Because the country depends so heavily on the Vakhsh for electricity (as well as for agricultural irrigation), the potential impact of global warming on the glaciers that feed the river is a major environmental concern. Other risks to hydroelectric infrastructure come from seismic activity. The area is prone to earthquakes, which sometimes cause landslides that block the river and damage infrastructure.